Sporting giant Adidas has launched a new concept that looks at individualisation rather than standardisation. Regina Henkel analyses the idea that aims to revolutionise production in the coming years. 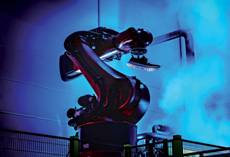 Adidas has announced the establishment of its first 'Speed Factory'. The purpose: Adidas intends to revolutionise production in the coming years, and be even closer to customer's needs at the same time. It was not until this summer that Adidas announced the plan to develop Speed Factories to take shoe production to a new level. Only a few months later, the first plant was built. It was erected at the Oechsler AG in Ansbach, Germany, not far away from the Adidas headquarters in Herzogenaurach. It is expected to produce 500 pairs of running shoes in the next few months. Commercial mass production should start in the near future, the company said.

The highly innovative concept of the Speed Factory is based on the idea of Industry 4.0, which many experts consider to be the production method of the future. The aim is to combine the latest digital technology with the automation possibilities of big data and new production methods. Until now, the manufacture of shoes and clothing was a hand labour-intensive industry; that's why it has been outsourced to low-wage countries. Only with the new possibilities of a highly efficient and automated production, that production sites in Germany and elsewhere in Europe are conceivable again. So, instead of continuing to outsource production to low-wage countries and accept the expensive transportation to consumers, Adidas wants to work in the future with smaller, decentralised and highly automated production facilities right where the consumer is located. The goal is a whole network of new sites that use intelligent robot technology will exchange data with each other.

In addition, Adidas will gain much more flexibility to better meet regional needs and be able to respond even to individual customer requirements. "Individualisation rather than standardisation" is the idea of Adidas. The consumer has to become part of the brand and can interact directly with in-store customisation, co-creation and interactive brand experiences.

"Speed Factory combines the design and development of sporting goods with an automated, decentralised and flexible manufacturing process," said Herbert Hainer, CEO of Adidas Group. "This flexibility opens doors for us to be much closer to the market and to where our consumer is. Ultimately, we are at the forefront of innovating our industry by expanding the boundaries for how, where and when we can manufacture our industry-leading products."

But the project, which has been supported by many other companies and institutions and with funding by the German Government, wants still more. When the first pilot plant succeeds, the new concept may solve several problems of the global apparel industry. It is not just about creating new jobs in a production branch, which seemed to be lost forever in countries like Germany. It is also about improving environmental performance by avoiding transport routes. In addition, the production would improve its transparency and control in the global value chain. Finally, the problem of product piracy can be curbed too.