MEG supports human life in satisfying all the three basic necessities i.e. food, clothing and shelter. It has been noted that MEG is on rising drift. Now-a-days, the textile industry and other industrial sectors focus on health awareness, smart sensor fabrics, innovation etc. for their product development and MEG touches human life in all areas.

Mono-ethylene glycol (MEG) is a versatile chemical which is harmonious with water and many organic components. MEG is a significant raw material for Polyester and Polyethylene Terephthalate (PET) polymer. MEG is used for applications that necessitate solvent couplers, freezing point depression solvents, chemical intermediates for resins, humectants and chemical intermediates etc.

The most efficient method for manufacturing MEG is: Ethylene and Oxygen are mixed to produce Ethylene Oxide (EO) in a multi-tubular catalytic reactor. EO produced in the reactor can be separated to high quality purified EO and further treated to produce mono-ethylene glycol as well as di- and tri-ethylene glycols. MEG is colourless, almost odourless and faintly viscous liquid. It can be mixed with water, alcohol, aldehydes and many other organic compounds. 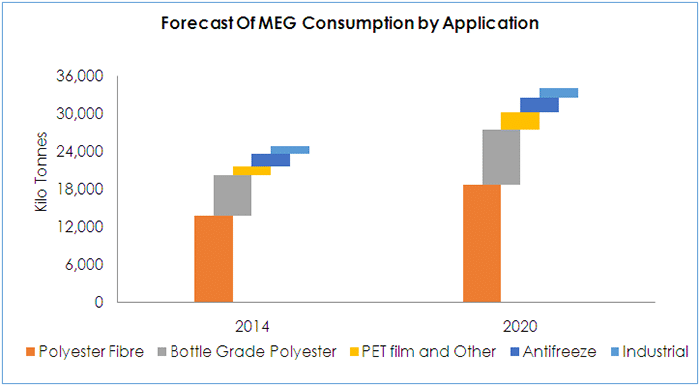 The major factor that is driving the growth of mono-ethylene glycol market is rising demand of PET resin, polyester fibres and antifreeze and also many other industrial usages. Rising demand for PET containers from various commercial and industrial end use markets including packaging due to better strength and impact resistance is expected to certainly drive MEG market. Rapid urbanization and changing lifestyle of consumers, particularly in emerging economies like India, China, Brazil and Mexico has been driving the packaging industry which in turn is anticipated to provide push to MEG market. Global MEG is expected to witness significant growth over the forecast period (by 2020) on account of its widespread applications in numerous end use industries including consumer goods, construction, automotive, pharmaceuticals, textiles and chemical processing.

Demand is expected to be good for MEG for the next five years. A sturdy growth is estimated for petrochemical industries in near future. With a demand seen growing in the key markets the industry would soon requisite new capacities.