Home / Knowledge / Article / Denim / Destination Europe: It's still all in the jeans

Destination Europe: It's still all in the jeans

The jeans market of the European Union remains an attractive exports destination, with the size of the market being � 4.6 billion. Bangladesh, which became the top exporter to the bloc in 2014, has retained its ranking in 2015. China's loosening grip over Europe has been consistent since 2013, and India is nowhere among the top exporters. Subir Ghosh reports.

When research is narrowed down to specifics, they often narrate an interesting story. So it was with a recent study that looked at the current status of denim imports into the European Union (EU). The findings are clear: it is Bangladesh that emerges as the front-runner, though it does not yet have a stranglehold over the European market; and India is nowhere to be seen among the top exporters. And China, like everywhere else, has been on a steady decline. 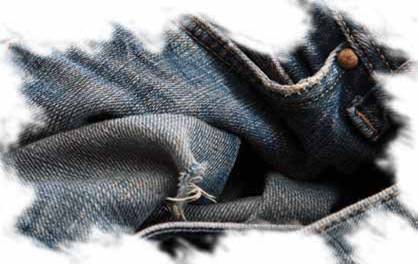 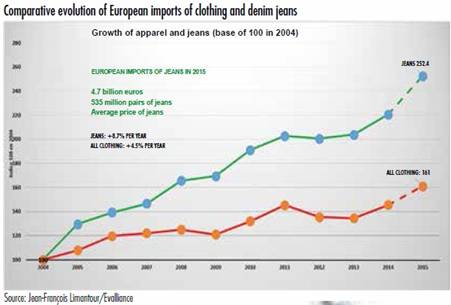 The findings of the said study 'Les importations europeennes de jeans en 2015' (The European imports of jeans/denims in 2015) were presented by Jean-Francois Lima tour, president of Evalliance, which was established in 2014 as a non-profit organisation to strengthen partnership relations between EU member countries and those of Indochina (Cambodia, Vietnam, Laos and Myanmar) in the areas of textiles, clothing, leather and footwear. The presentation was made in mid-February during Texworld and Apparel sourcing Paris in the French capital. 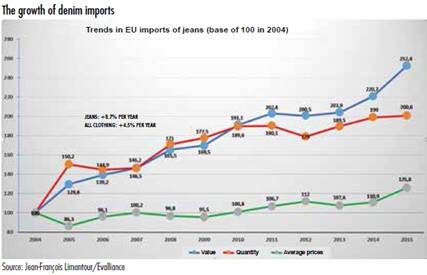 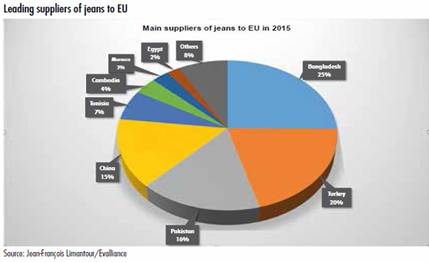 The European Union market remains huge, and growing: 535 million pairs of jeans were imported in 2015 alone; and the number of consumers was found to be 508 million. The size of the market was a staggering �4.6 billion, with the average price point of a pair of jeans being �8.59. And, the growth itself has been phenomenal. From a base of 100 in 2004, the number of items has grown over two and half times to a scale of 252.4. In comparison, the total garment imports made by the EU grew only 1.6 times to 161. The trend is clear: the imports of the denims/jeans segment is growing almost twice the growth rate of the garments imports sector taken together.

It is the overall value of goods that has been growing more than either the absolute quantity being imported into the EU, or even the price points. Again, with 100 as the base in 2004, the value of imports has grown consistently over the years to top 252.4 in 2015. The quantity of jeans dropped for two years during the recession in 2006 and 2007, falling again in 2012, to eventually double up to 200.6. The average price points, however, have not shown corresponding rises, dipping once in 2005, and again in 2008 and 2009, to reach 125.8-an increase of just 1.25 times.

The leading supplier to the EU is Bangladesh, with a flat one-fourth of the share of the market. Turkey is close behind with 20 per cent, followed by Pakistan at 16 per cent and China at 15 per cent. The rest have a single-digit share: Tunisia (7 per cent), Cambodia (4 per cent), Morocco (3 per cent), Egypt (2 per cent), and others (8 per cent).

Bangladesh was the fourth largest exporter to the EU in 2008, climbing gradually to the top spot in 2014. Bangladesh exported 182 million pairs of jeans worth around �1.1 billion to the EU in 2015. The average price point was �6.42. In terms of value, Turkey was next with �958 million, followed by Pakistan with �765 million and

China with �693 million. In terms of volumes however, it was Pakistan which was second with 96.8 million pieces and China with 92 million. The average prices, however, were a different story altogether. The most expensive items came from 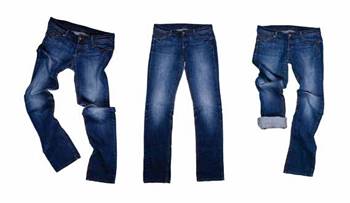 The performance of the main eight suppliers in the 10-year period between 2006 and 2015 tell another interesting story. In terms of value, Cambodia has shown the highest percentage increase with 39.1 per cent. In comparison, Pakistan grew 17.3 per cent and Bangladesh 14.7 per cent. Morocco was the only one to clock a negative growth of 1.2 per cent. In terms of quantity too Cambodia grew phenomenally at 34.2 per cent, with Pakistan (12.0 per cent) and Egypt (11.3 per cent) way behind the leader. The average price points too did show a growth, but not that widely. The price per pair of jeans from Bangladesh rose 5.4 per cent and that of Pakistan 4.7 per cent. Others were even less. So, even though both in terms of overall imports as well as number of items, the market has grown, the average prices have only grown marginally.

A closer look at the performance of individual exporters (to the EU) tells distinct and intriguing stories in themselves. 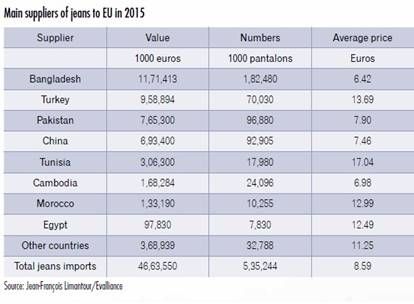 Turkey too has been improving on its performance, but its decline came surprisingly in 2009 when overall values and quantities as well as average prices dipped considerably. In fact, the average price from Turkey remained well below the 2006 threshold of 100 till 2010, and has only marginally recovered to 106.9 in 2015. The values have risen 1.5 times. In terms of ranking, Turkey has remained second since 2008, being the biggest exporter just once in 2013. On the other hand, Pakistan has shown a robust performance since 2013. Till 2012, Pakistan had grown only marginally on all three counts. However, in value terms, Pakistan grew from 192.2 in 2012 to as much as 418.9 in 2015, arguably the best performer on that aspect (apart from Cambodia). 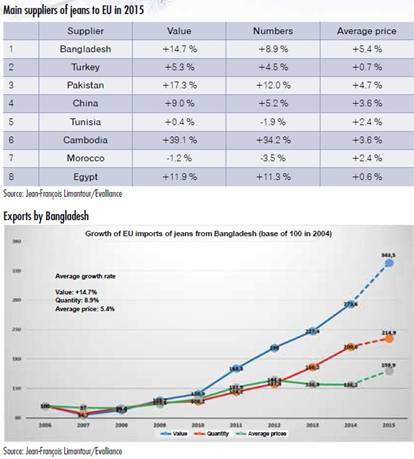 China's loosening grip on the global textiles and apparel market is there to be seen in the EU jeans market too. China was the largest exporter to the EU all through 2008 to 2012, but is in the fourth position now. Backed by overwhelming and unrelenting government support during the downturn of the mid-2000s, it had been the only country that had bucked the trend during the time. In terms of value, China's denim exports had risen as much as 3.4 times between 2006 and 2010. Since then, the decline has been as sharp, and consistent too. In the 2010-2015 periods, the values dropped to half the peak levels. In terms of quantities too, the story has been similar, registering only a marginal recovery in 2015. During the recession, the average prices had dropped a bit, but have hovered around the 2006 levels, again showing a marginal recovery in 2015. Given the fact that China is known for its relatively cheap products, this is not difficult to understand.

Egypt, Morocco and Tunisia have been erratic performers all through; but it is Cambodia that merges as the star performer, partly because it has more ground to cover as a relatively new entrant. In terms of values as well as volumes, the growth has been simply phenomenal. Cambodia as placed 22nd in 2008 and 29th in 2009, but has jumped to the sixth position in 2015. Till 2010, Cambodia was virtually non-existent (as an exporter), with all three yardsticks showing a negative trend in 2007. Since 2011 however, values and volumes have been growing quite remarkably. Values have shot up by 19 times and quantities 14 times since the base levels of 2004. The trend is unmistakable when matched with China's gradual decline over the same period. The upswing of Cambodia and the downswing of China are consistent with reports that garment manufacturers are increasingly turning their attention to the Indochina countries in the face of rising labour costs in China. This contention is also in tune with the trend of the average price points of Cambodian denims-it remains cheap like China's, growing only 1.3 times during the 10-year period.

The Evalliance study also looks at the importers. Germany is the biggest market within the EU, accounting for 24 per cent of the volume. Spain is the next in size with 15 per cent, followed by the United Kingdom and Netherlands (both at 13 per cent), France (10 per cent), Italy (9 per cent), Belgium (5 per cent), Denmark (4 per cent) and Sweden (2 per cent). In terms of average price points, Italy imported the most expensive jeans at �11.12 per item, followed by Denmark at �10.40.

But all these numbers are about how things stand as of now. What has been there on everyone's mind is how the Trans-Pacific Partnership (TTP) and the Transatlantic Trade and Investment Partnership (TTIP) can affect the denim supplies to Europe. Limantour says, "I thinkthat Bangladesh, China and India will not be directly impacted by the implementation of the TPP. But indirectly, yes. In fact, most experts consider that Vietnam will be the great winner of the implementation of the TPP. It means that, thanks to this free trade agreement (FTA) and also to the FTA that was concluded in December 2015 with the EU, Vietnam will rapidly become the main textile-clothing hub in South-East Asia. Why? Notably because many Chinese textile investors, confronted with serious problems of costs, are sharply increasing textile and clothing investments in Vietnam where they find attractive input costs (wages, energy) and from where they will be able to export, without customs duties, fabrics (including denim) and garments (including jeans) to the US and EU. And thanks to these investments, Vietnam becomes self-sufficient for its textile needs (yarns, fabrics) and improves its global competitiveness on the European markets, in terms of costs, quality and reactivity, to the detriment of other competitors like India." 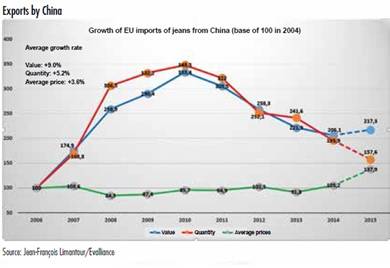 Indian readers will find it rather disconcerting to note that the country figures nowhere in the list of the toppers. India was never in the top bracket, but the steady decline of Indian exports to the EU should be a matter of concern. India was the seventh biggest exporter of jeans to the EU in 2008, falling to the eighth spot in 2009. Since 2012, it has remained in the ninth position.

Limantour has an explanation: "India is only the ninth supplier of denim trousers of the European Union. India suffers from two main disadvantages. First, very few Indian textile/clothing companies promote their offers through participation in European textile/ fashion fairs or by means of collective business missions in Europe, unlike other competitor countries such as China, Turkey, Bangladesh or Pakistan. Obviously, India suffers from a lack of promotion and image in Europe. 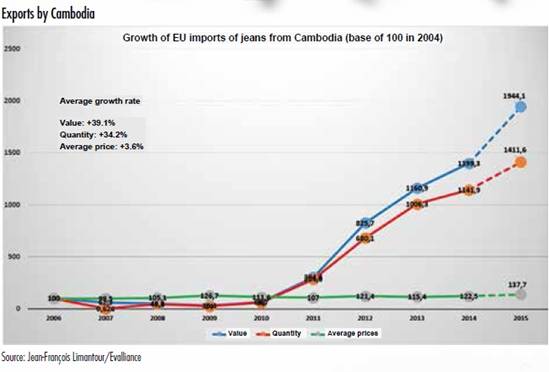 "The second disadvantage is that, unlike competitors such as Turkey, Bangladesh or Cambodia, jeans imported into Europe from India are subject to a customs duty of 12 per cent. Thanks to the 'Everything But Arms' system, Bangladesh and Cambodia can export without customs duties, and regardless of the origin of the fabrics, to the European markets. It is the same for Turkey, thanks to a customs union agreement with the EU. There is no doubt that the day when India has an FTA with the EU, the lives of the Indian textile and clothing exporters will be totally facilitated and improved� by the agreement)."