Beachwear is a popular clothing option for millions across the globe, yet textile and apparel exporting nations have not capitalised on this market, says Christine Rudolph. 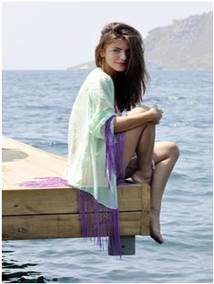 One segment of apparel that may provide much-needed impetus to increasing exports and establishing trade relationships is beachwear. Europe, the Americas and East Asia are among the hottest markets for this ready-to-wear section. It has huge potential for any export-oriented nation because the skeleton of beachwear production is similar to other forms of textile goods. It just gets differentiated at the end level where value is added to the product.

We are at a crossroads. The market is diversifying as changing trends worldwide usher in a new era for phenomenal growth. Cultural, economic and social attributes are pushing back them north and bringing in more positivity for acceptance. Demand for beachwear has increased in a larger section of the population than was previously noticed.

Recent changes in the way people perceive themselves and inclusion of men in the well-being game of looking good have made possible this ultimate incision the industry needed to keep itself relevant to export. Beachwear can make production-oriented economies come up with their expertise and fresh ideas. It also offers more cost options than previously thought possible. There is no room for novice experimentation in this arena. Tastes and preferences may be developing, but they are not under-resourced in ideas and designs.

Quality beachwear is provided by companies that continue to dominate the market, but what they lack is their reluctance to delve into newer markets. Slower supply initiations make it difficult to gain a foothold in areas where there are cultural and social barriers to beachwear. If newer producers enter the market, increasing competition could make it possible to explore possibilities of expanding clientele in areas such as the Middle East. Producers who come in now can introduce locally acceptable beachwear options and break the taboo associated with traditional beachwear.

Global trends suggest that by 2022, revenue from beachwear will be hovering somewhere around US$ 22.7 billion for close to 2.2 billion units annually. Although there is room for more growth, lack of frequent new entrants means the beachwear market is growing with a leash on itself.

As men's and children's beachwear catch on, possibilities increase. Men seem happy to compete with women in terms of appeal and style. Attitudes have changed drastically following the appearance of social media apps, which have ushered in a huge change on how people perceive themselves and want themselves to be perceived. This has increased more positive trends like men taking care of how they look. Family outings to the beach are now Instagrammed or put on Snapchat. This kind of visual display may seem trivial but the power of social media in all the aspects of our lives is undeniable.

Low cost beachwear is now produced on a vast scale but it still has lot of room to expand because countries with potential like China and Vietnam are not fully utilised for mass production with the capacity they currently have.

It is only a matter of time and momentum before beachwear gains as much importance as other forms of textile and apparel value added goods. Producers who exploit this opportunity will have a lot to gain compared to the amount of risk involved in this business venture, as demand is likely to get steeper compared to other textile goods whose demand graphs are now flattening out. This latency in demand for textile goods makes an interesting scenario as producers look for other options to continue the growth. Only the future will tell whether or not this optimism falls onto the section of beachwear.

Blogger Christine Rudolph writes on fashion and lifestyle and is associated with Sophie & Trey, an online clothing store for fashionable women.