Home / Knowledge / Article / Printing / Digital is how it will all be

Digital is how it will all be

Digitally printed textiles still constitute a niche market, but it's one that is growing very fast. The 4th International Digital Textile Congress 2016, themed 'Catch the Digital Wave' at Ghent in Belgium on September 15, had one trend to forecast: that fast market growth will soon be matched by fast technological progress. Jozef De coster reports from Ghent.

Just as in the United States, many in Europe too are thinking of reshoring textiles and garment manufacturing back to their own country. Several speakers at the 4th International Digital Textile Congress in Ghent, Belgium referred to opportunities, especially speed and customisation, offered by digital textile technologies.

According to Eric Hopmann, CEO of leading producer of colourants and auxiliaries Dystar, even without taking into account the opportunities offered by digital textile technologies, big movements in the global textiles and garment industry will take place in the coming years. In the past twenty years and especially in the decade after the end of the Multi-Fibre Agreement (starting in 2005), production capacities in the West shrunk because of the big shift to the East. But now, the time has come for China to focus more on its own market and to move production capacities back to the West. Not only will Southeast and South Asia benefit from this shift, Turkey and even Mexico could benefit from the shift.

Mark Vervaeke, director at the Belgian textile association Fedustria, argues Hopmann fails to see the reshoring potential of Europe. He says, "Take an European country with relatively low labour cost and a rich textile tradition, like Portugal. I am sure that even Portugal will benefit from the ongoing movement from East to West."

Mike Horsten, who represents leading Japanese manufacturer of wide-format inkjet printers and cutting machines Mimaki in the Netherlands, agrees. He thinks that in the future, much more garment making will take place in Europe. Why? Because personalisation of clothing will be made possible by new digital textile technologies. Horsten predicts that European fast fashion chains like Zara, Mango and H&M will show more interest to produce in low wage countries like Romania and Bulgaria.

Even Oliver Luedtke, marketing director at Kornit Digital, says that industrial direct garment printing is paving the way for profitable mass customisation. Kornit Digital is an Israel-based international manufacturing company that produces high-speed industrial inkjet printers and pigmented ink and chemical products for the garment and apparel decorating industry. Luedtke says, "Digital production technologies have arrived in the textile markets. We know from our customers that those technologies enable new and exciting business models."

Karen Deleersnyder, researcher at Centexbel (Belgium) says additive manufacturing (3D-printing) will play an important role as a new tool for production of customised fabrics. She says, "Additive manufacturing techniques are highly appropriate for mass customisation on a local scale. They may lead to a more efficient consumption of raw materials and stock management. Small series of specialised products become profitable. Ideas that could not be realised become real."

Deleersnyder says that customised textile production is especially important in the production of protective clothing and sportswear. Standard sportswear may be equipped with 3D-printed knee protection and shoulder pads (tailormade on the basis of a body scan). In the case of apparel mass customisation, one may think of directly 3D-printing of complex structures or unique buttons.

Digital factory of the future will be green

Director Gerrit Koele of Dutch technical textiles giant TenCate praises inkjet technology not only because it makes 'mass customisation' and 'on demand delivery' possible, but because of its 'green' advantages too: it saves water, energy and wet chemicals like inks. Cooperating with technological partners, TenCate is working hard to make progress in several domains like digital dyeing, printing and finishing. In its Factory of the Future in Nijverdal (the Netherlands), the company has succeeded in perfecting an inkjet technology which, for example, for the dyeing of fabrics, can guarantee colour fastness that 100 per cent equal to that of analog dyeing, while achieving 25-30 per cent dye savings and 30-50 per cent water savings.

Jorgen Lindahl, senior area manager of SPGPrints, argues that "digital means more sustainable." SPGPrints (formerly Stork Prints), with headquarters in the Netherlands and subsidiary companies in seven other countries (including India and China), calls itself "the inventor of the digital inkjet process." Twenty-five years after its launch, the company still has the ambition of remaining at the forefront in developing the inkjet process. Lindahl refers to the World Textile Summit 2015 in Milan where top people of the global textiles and machinery industry met to find business responses to the international drive for sustainable manufacturing. 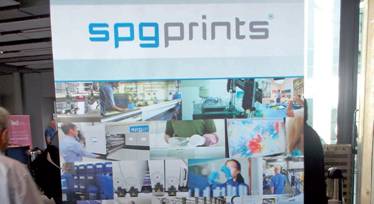 SPGPrints is one of the companies which is convinced that market opportunities arise from a strategy based on clean production and sustainable materials. Lindahl says, "We think our new PIKE digital printing line, which we launched last year, represents a second revolution in textile printing. We made life cycle assessments (LCA) to compare rotary screen printing with digital printing. Conclusions from calculations are not easy. Digital printing has 22 times less impact on environment, but with rotary you have 43 times more printed metres. In the end, the ecological balance of digital printing in terms of power consumption and water saving is much better. One of our German customers conducted a detailed study of water savings he achieved by switching to digital print. The result was amazing: if the whole global printing industry would switch to digital, it would save 760 billion litres of water per year."

Steve Knight of Association of European Manufacturers of screen printing equipment and supplies (ESMA) suggests that the textiles sector should pay attention to the famous Law of Moore, which says that the number of transistors in a dense integrated circuit doubles approximately every two years. Moore's prediction, made in 1965, proved accurate for several decades, and has not only been used in the semiconductor industry but as well in other industries (like digital cameras) where digital electronics play an important role. According to Knight, Moore's Law is also valuable for the digital print machines. The print quality and printer performance depend on the processing of an unbelievably big number of data. A digital printer processes up to 15,000 times more data than a 4K video (a video with ultrahigh definition). Electronics is at the heart of the digital printer technology, and therefore the possibilities of printers are so huge that in future there will be barely any human intervention needed between the customer and the digitally printed end-product.

For the time being, the fast-growing Belgian manufacturer of technical cycling clothing Bioracer cannot yet do without a specialised workforce, but it has already taken a big leap forward when it shifted from screen printing to digital printing. CEO Danny Segers explains, "Screen printing was an old technology nightmare. We were limited in design, in colours (five colours was the maximum), in accepting minimum quantities and in production speed. Besides, screen printing is a tough physical job for which it is difficult to attract workers. Fortunately, since 2010 we could rapidly increase the number of digitally printed shirts, from 10 per cent of total production in 2010 to 70 per cent in 2013. Now, we enjoy freedom of design and of production location (Bioracer has factories in Belgium, Romania and Czech Republic and will soon start production in Macedonia). We work on some 15,000 designs per year, of which we ourselves make 4,500 (the rest is created by our customers mostly via social media). We see that people are willing to pay a higher price for customised products. By 2020, we want to penetrate Asian markets."

Segers is sure that the young market of digital printing will grow fast in the coming years. He regrets, however, that some patents are blocking innovation and that the supply of some products is dominated by monopolies.

Romanian company Gemini Cad Systems says it is bringing in a game-changing solution to digital printers producing large textile parts like sportswear, fashion and big size prints for the advertising industry. Product manager Ana-Maria Gulei explains, "Despite the existence of performant digital textile printing tools, the current process for the custom sportswear production has major bottlenecks. These are caused by poor communication in its three main stages: the raw cut parts preparation, the prepress and the finishing of the whole process. But, our new Gemini Digital Print Cutting software solves this problem. The process becomes automated and ultrafast, starting from the communication with an ERP software to the design, cutting and collecting."

Maxime Durka, R&D manager at Sioen Textiles, the largest Belgian technical textiles producer, points out that clothing is like packing the human body the way paper is used to pack food. Studies show that scores of chemicals from digitally printed packings penetrate food. It's therefore important to keep in mind that digital garment printing can cause damage to the human body.