Few machines are as critical in a modern spinning mill as the roving frame. Building a solid and reliable roving frame is not easy. Yet, it is absolutely necessary for the spinner as this machine can feed, depending on the count being produced, thousands of spindles at the spinning frames, says Marzoli.

Marzoli is the only European manufacturer of the full line of machines for spinning of short staple fibres. With over 150 roving frames sold every year worldwide, it is a reliable option for those looking for tried and tested technology. Its FT6E and FT7E represent a state-of-the-art solution, yielding the best results for efficiency, reliability and quality. 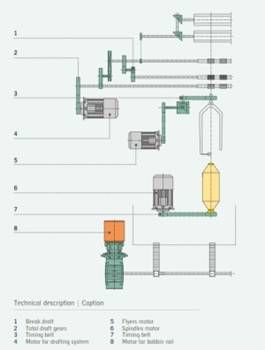 The FT6E and FT7E are driven by independent drives for the drafting system, the flyers, the spindles and the bobbin rail. Every drive is coordinated by the central CPU which ensures perfect synchronisation of all movements involved in bobbin formation.

The spindles drive is a group drive where motion is transmitted through toothed belts. In traditional machines, spindles are moved by one motor which, through a long shaft, transmits motion to bevel gears which drive pulleys that drive belts which ultimately make spindles rotate. A group drive allows to simplify this transmission system. The drive comprises several motors, each one driving a limited number of spindles. Each motor, through a pulley, drives toothed belts which transmit motion directly to the spindles. Shafts, gear boxes and bevel gears are eliminated.

Therefore, it is possible to:

- increase transmission efficiency because the transmission system comprises only a pulley and toothed belts. There are no shafts and no bevel gears. This reduces energy consumption.

Marzoli roving frames can be equipped with a 3-over-3 or 4-over-4 top-of-the-class drafting system. There are two options for the cylinder diameters. The standard solution has a diameter of 32mm; however, in case there is a high percentage of short fibres in the processed material, cylinders with a diameter of 27mm can be used to reduce the gauge between nipping points. This guarantees better control of short fibres during draft.

Marzoli drafting system can also rely on highly efficient cleaners for both top rollers and bottom drafting cylinders. For top rollers, there are two options: Rollers with rubber fins and revolving felt belts. For the bottom cylinders, there are rubber scrapers. These solutions guarantee that at every turn both top rollers and bottom cylinders are always cleaned. This, along with the high quality of each and every component, entails the perfect control of fibres during draft and top quality of the roving.

As bobbins on modern roving frames are arranged in two rows, rovings can have different angles at the delivery of the drafting system and at the entrance of the flyers' top. It has been argued that these different angles can entail differences in the spinning triangle at draft delivery and different tensions of the rovings thereby causing an uneven take up of twist and variations in roving count.

On Marzoli machines all rovings lie parallel to one another, they have the same angle at the delivery of the drafting system and at the flyers' entrance for both the front row and the back row of bobbins.

Individual sensors ensure that each roving break is properly detected and the machine securely stopped, even in case of roving overlap around the cylinder/top roller. On the other hand, if dust passes in front of the sensors, the machine would not stop. Individual sensors also make suction redundant. This, with the IE3 motors and an overall design meant to minimise energy consumption, allows to save up to 4 Kwh.

Roving tension is kept constant within a pre-set range through sensors that constantly monitor roving's fluctuations between the delivery of the drafting system and the flyer's top and adjust the speed of the spindles accordingly. These sensors play an important role in ensuring that there are no false drafts in the roving and that roving breaks are kept to a minimum. 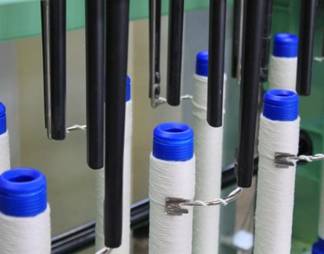 The FT6E (110mm gauge) can reach 224 spindles and produce bobbins of 16" x 6". The FT7E (130mm gauge) has a spindlage up to 168 spindles and can produce packages of 16" x 7". These numbers represent the limit in terms of number of spindles and dimensions of bobbins to maintain top efficiency standards. A higher number of spindles per machine would not give an additional benefit to the spinner as the decrease in machine efficiency would not be counter-balanced by the reduction in the average cost per spindle.

The flyers installed on Marzoli's roving frames are made of ultra-light alloy and are dynamically balanced so that even when working at high speeds, vibrations are kept to a minimum. Marzoli's roving frames can reach up to 1,500 rpm mechanically and the roving can be wound on standard tubes, with a diameter of 53.5 mm, or on thinner tubes, with a diameter of 48mm, to have a further slight increase in bobbin capacity.

The creel is equipped with hexagonal aluminum rollers to prevent false drafts, a very important aspect especially when working with combed slivers. Optic sensors positioned between the rollers ensure that in case of sliver break, the machine is immediately stopped. Marzoli roving frames can be fed with cans with a diameter of up to 24" which allow to reduce machine stops and increase its efficiency.

One of the crucial aspects on modern roving frames is automation especially on doffing since doff is costly, frequent, has an important negative influence on efficiency (especially on long roving frames) and, done manually, can damage the roving bobbins.

Nowadays, there are several options for automatic doffing. One of the simplest, most reliable and fastest, automatic doffing systems is the one that Marzoli implemented, tested and refined in the last 20 years. With this, in less than three minutes, full bobbins are replaced with empty tubes and the machine is restarted. During the new doffing cycle, full bobbins are forwarded to the transport system which carries the packages to the spinning frames.

A semi-automatic doffing option of the machine is available. With this version ergonomics has been substantially improved if compared to standard manual-doffing machines. After bobbin formation is completed, the bobbin rail lowers and tilts out for easy bobbin collection. There is a parking rail in front of the bobbin rail with empty tubes so that substitution of full bobbins with empty tubes is as easy as possible.

With the release of the FT6E and FT7E Marzoli offers also a third option: The roving frame with the prearrangement for automatic doffing upgrade. During doffing, the bobbin rail lowers and slides out horizontally, just like the fully-automatic model. Besides permitting easy collection of full bobbins, this allows an easy and cost-efficient upgrade of the machine to the fully-automatic version. 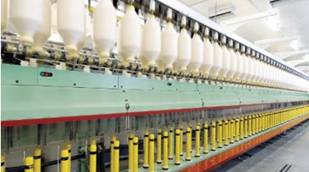 To succeed in the highly competitive and globalised sector, spinners must minimise production costs of which energy consumption is an important component. Marzoli roving frames represent an outstanding machine from the energy consumption point of view. This machine is the only one that does not need suction. Thanks to individual sensors installed as standard, any roving break can be promptly identified. No suction is required to capture the broken roving and make it pass in front of the photocell.

This, with the IE3 premium efficiency motors, the light weight components (e.g. the bobbin rail in aluminum) and overall design meant to minimise friction and transmission inefficiencies, entails energy saving of over 4 Kwh every hour of operation.