The new Garment & Apparel Policy 2017 of the Gujarat government will enhance cost-competitiveness as well as ease of doing business in the state, say Varun Vaid and Disha Acharya

The Gujarat government has announced its new Garment & Apparel Policy 2017. The policy aims at creating one lakh new jobs, generating an additional Rs3,000 crore of exports, and attracting Rs1,600 crore of investment in the apparel sector over the next five years. The fiscal and non-fiscal support announced under this policy are aimed at enhancing the cost-competitiveness as well as ease of doing business through apparel manufacturing units in the state.

Gujarat has the presence of the entire textiles and apparel (T&A) value chain, starting from availability of raw material, yarn production, fabric production, up to apparel and made-ups manufacturing units. Gujarat contributes to 27 per cent to India's cotton fibre production (1,600 million kg), and in case of manmade fibre production, the state's share is nearly 50 per cent. Almost 30 per cent of India's mill sector production of fabric (640 million sq m) comes from Gujarat. The state has 14 sanctioned textile parks, which is second highest in number among all the states.

It also has the highest number of medium and large textile processing houses and is home to more than 50 per cent of India's processing machinery manufacturers and 90 per cent of weaving machinery manufacturers. Moreover, it contributes around 25 per cent to the country's technical textiles output. The T&A exports from the state account for around 12 per cent of total T&A exports from India. Gujarat has a huge installed capacity for T&A production with Rajkot, Ahmedabad, Navsari and Vapi as major spinning clusters and Anjar, Ahmedabad, Surat, Vapi and Mehsana being major weaving clusters. Due to these key strengths, Gujarat is home to leading textile sector companies such as Arvind Mills, Welspun, Alok Industries, Raymond, Mafatlal, Aditya Birla Nuvo, among others. 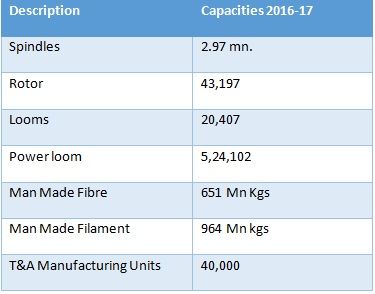 The Gujarat government had launched its textile policy in 2012 to promote investment and employment in the T&A sector which offered investment incentives such as interest subsidy, power subsidy, stamp duty exemption, support for establishing textile parks, building skill development centre, etc. It helped attract significant investments worth Rs20,000 crore into the state and created 2.5 million jobs, mainly in the segments of ginning & pressing, yarn manufacturing, few technical textile categories, training centres and textile parks. In order to provide a further thrust to the sector and attract investment in the downstream value chain, the state government has now identified apparel manufacturing as the engine for growth and released a dedicated incentive package under Garment & Apparel Policy 2017.

The key highlights of the new policy are as under: 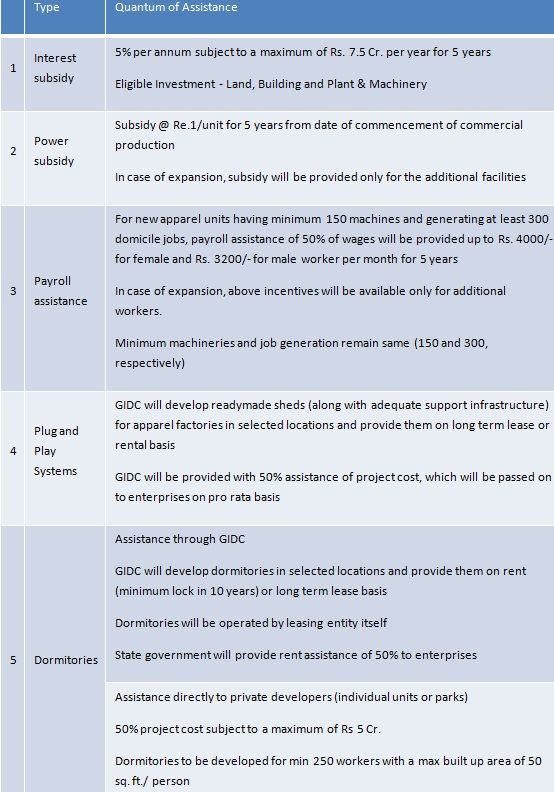 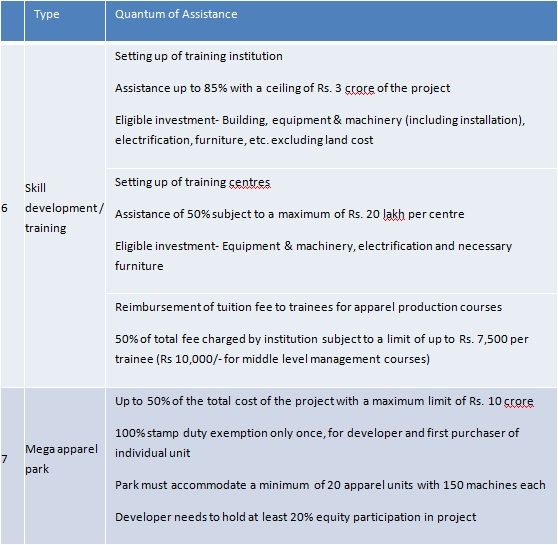 Out of the various incentives provided, there are three major attractions for apparel investors:

Plug and play systems: The government has gone a step forward by providing infrastructure support to the industry which is first of its kind incentive in the country. The government will provide compliant and good, standard ready-to-move-in sheds to manufacturers at reasonable costs. Such incentivised readymade set-ups will reduce the cost of establishment and help investors come up with bigger units.

Assistance for dormitory construction: Though there is a huge availability of manpower in the state, retaining the workforce in the apparel sector is one of the key challenges that the industry is facing today. Availability of dormitories near factories will not only address this challenge, but also provide compliant and hygienic habitats to the workers.

How much does one get under the policy? To understand the fiscal incentives available for establishing an apparel manufacturing unit under this policy, let us examine an illustrative project: 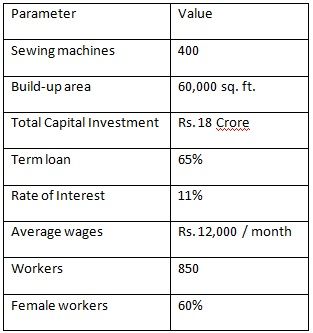 Based on industry ball park figures and calculations, the yearly incentives work out as follows:

Payroll assistance is a major fiscal support for apparel companies as wages have a major share in the cost of manufacturing. In India, there is precedence of payroll assistance being provided by few other states to the T&A sector. However, the infrastructure support being provided by Gujarat in the form of readymade sheds and dormitories is first of its kind. China had adopted this model in late 1980s when it was in its initial phase of industrialisation. It established large industrial zones which provided all types of support infrastructure to investors. Today, Ethiopia is doing the same by providing such facilities in its industrial parks. Gujarat has taken the lead in India to establish such infrastructure and significantly reduce the associated risk for investors. By providing this infrastructure support, the government of Gujarat has created a possibility for investors to set up operations in expensive zones (with better connectivity, manpower availability, etc) without creating their own infrastructure. This also reduces the associated financial risks, which can actually enable investors to plan much larger projects.

The new Garment & Apparel Policy, with its multifold fiscal and non-fiscal incentives, is expected to significantly enhance the attractiveness of Gujarat as an apparel manufacturing destination. The key will be the timely implementation of infrastructural support in line with the industry requirement, which needs to be the focus of the state government.

Varun Vaid is Associate Director with Wazir Advisors, where Disha Acharya is a consultant.