Recent trends in dyeing of cotton

The textile industry is one of the major contributors to water pollution in India. The various processes that contribute to water pollution are sizing, desizing, scouring, bleaching, mercerization, dyeing, printing and finishing. Each process uses various chemicals that are let out into effluents. Thus, by dumping chemical effluents the eco-balance of nature has been gradually disturbed. In recent years there has been a growing need for controlling pollution through industrial effluents and full fledged efforts are being made by governments the world over to draw up or to tighten the legislation pertaining to the controls on the types and extent of pollutants that could be passed onto nature.

The consumption of cotton is almost half of the world's total fibre consumption and it is expected to maintain this position during the current century. Surveys conducted on the consumption of dyes the world over, indicate that in the next five years, the sulphur, direct, vat and indigo dyes will remain constant, azoics will continue to decline, and reactive dyes will show increase. The lack of growth of dye classes other than reactives may be attributed to factors such as high price and limited supply, environmental problems and technological obsolescence.

Reactive dyes -promise of the future

It has been estimated that the use of reactive dyes would raise up to 50% by 2004. Though the reactive dyes can minimize the effluent problems, yet two problems need to be tackled viz.

Removal of colour in the effluent

The removal of colour from the effluent is rather expensive with the conventional technique. Unlike other classes of dyes, in the case of reactive dyes, sometimes as high as 30% dye remains unbound during primary treatment and needs to be treated either on site as a secondary process after biological oxidation or at a municipal sewage works.

The Table 1 shows various homo bi functional and hetero bi functional reactive dyes, which are presently being marketed. The homo bi functional dyes were developed for high temperature ranges in exhaust dyeing with substantially increased exhaustion and fixation. This led to better dye utilization and resulted in less hydrolyzed dye and less effluent.

Two or even three reactive groups in a dye molecule do not guarantee 100% fixation efficiency and thus a through wash off procedure is essential, particularly in heavy shades. Perhaps, the answer may be the design of more effective after-treatment agents to interact with the hydrolyzed dye during the finishing process, allowing the small amount of hydrolyzed dye to be chemically immobilized in the fibre. 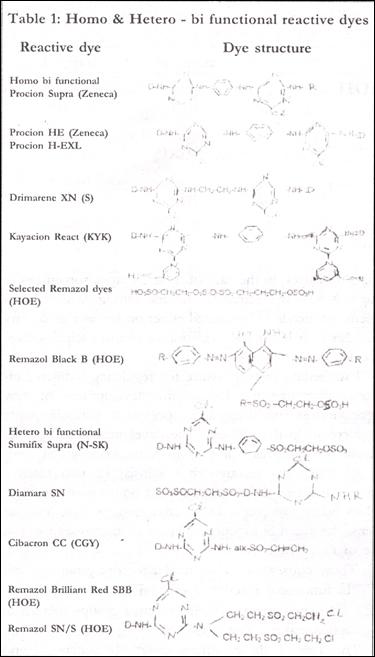 In a continuous dyeing operation, minimization of dye liquor wastage is a major environmental consideration to reduce colour in the effluent. Recent developments have made it possible to decrease the pad liquor volume to 10 litres as the fabric comes to the end of the run.

There are various methods to minimize the use of chemicals, some of which are listed below:

Continuous dyeing of reactive dyes is carried out by cold pad-batch, pad dry-thermo-fix, pad-steam and pad-dry-chemical, pad-steam processes. These involve the use of various chemicals such as urea, soda ash, caustic soda, salt and sodium bicarbonate which cause loading of the effluent to various extents.

Use of low salt reactive dyes

The following are the approaches to minimize the salt load.

Low - salt dyes have been developed which require only 20g/litre salt, where as the conventional reactive dyes require 60-80 g/litre salt for exhaustion. As the salt requirement is reduced to 1/4 of that required for conventional dyes, the saving in cost is observed. Another benefit is that rising step after dye application is much faster and less water is needed.

Lowering of liquor ratio brings down the volume of water used and the waste generated. Apart from the easier handling of lower volume of effluent, the dosing of chemicals and auxiliaries in the dye bath is done on the basis of g/litre of liquor. This significantly reduces the quantities of chemicals and auxiliaries and finally the effluent load. In reactive and vat dyeing systems, a change of liquor ratio from 1:10 to 1:5 brings about a decrease in pollution load by about 40%.

Owing to its comfort properties, cost effectiveness and environment friendliness, consumption of cotton is estimated to increase world wide. Among the various classes of dyes suitable for dyeing cotton, the use of reactive dyes is going to increase in comparison to direct, azoic vat and sulphur dyes. Some of the approaches adopted for eco friendly colouration of cotton with reactive dyes include the use of bi functional reactive dyes having high exhaustion and fixation. Properties, low - salt reactive dyes, machinery developments for dyeing at low liquor ratio, pad troughs with reduced volumes, replacement of urea with dicyandiamide, econtrol process etc.

Research, is in progress for replacement of sodium hydro-sulphite in vat dyeing and sodium sulphite in sulphur dyeing. The use of iron (II) complexes for vat dyes and glucose for sulphur dyes seem to be promising.