India is a diverse country and the uniqueness of this nation is a garment called SAREE OR SARI, draped by the Indian women. The draping style of the sari is different in every state as well as by different communities. The Sari can be worn over a choli or blouse which forms the upper garment and can be draped around a lower garment the petticoat.

Saris form the culture in India and each State and its many regions are known for their specific saris. A sari makes a women complete by its drape, accentuating her feminine curves, yet giving her altogether a graceful touch. 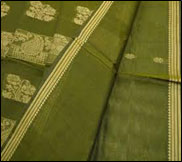 The border style is one of the basic points of distinguish between different sarees from the South Indian region. While contrasting wide borders are popular styles for some of these varieties, there are others with borders not wider than 1 inch. Wrap patterning, dyeing and weaving are the popular practices for designing different types of borders for these sarees.

Coimbatore is the North West region of the state of Tamil Nadu and produces a very fine cotton cloth in an amazing range of traditional and artisan styles. The sarees are all 48" width or more and the standard six yards. Soft cotton handloom sarees are the specialty of Coimbatore. 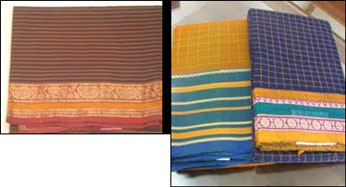 Chettinad is a region of the Sivaganga district of southern Tamil Nadu state, India. Karaikudi is known as the capital of Chettinad. The uniqueness of these sarees is their bold colors and patterns of checks and stripes in contrasting hues. These sarees are slightly heavier or rather thick and that is one of the reason they are not so much in demand in this fast modern lifestyles.

One of South India's great temple towns, Madurai is synonymous with the celebrated Meenakshi Temple. Situated on the banks of river Vaigai, Madurai has a rich cultural heritage passed on from the great Tamil era more than 2500 years old. Madurai was an important cultural and commercial centre even as early as 550 AD. It was the capital city for the great Pandya kings.

The Madurai town is famous for Sungudi sarees. The peculiarity of Sungudi sari is their border and the tie and dye art which is imparted on these saris. This ethnic art of Saurashtra is seen in south India on these saris. The 48 inch saris are tie and dyed to create beautiful patterns of sunbursts effects, marbelling, bindis etc along with the woven border. Sungudi as the name says is the best wear in summers the saris are dyed with vibrant colours and have the ability to reflect the hot Tamilnadu sun. Saris from the south are known for their cotton and Sungudi sari too is constructed in a way that it is light in weight and soft to touch.

Kancheevaram saris the pride of India finds its roots in the city of kancheepuram also known as the Silk City. The city boasts of expertise handloom weavers who take pains in creating and giving birth to kanjeevaram, the art consists of manually dyeing the silk yarns, warping and drawing them as per the design and finally weaving the saree.

Kancheepuram is popular for its famous silk sarees with renowned craft works a traditional home industry.

The kanjeevarams were once upon a time and still are woven with gold threads and zari to create beautiful patterns of peacock motifs, paisleys floral. The saree is heavily woven with the zari work and looks rich. Every female prides in owning a Kanjeevaram. This saree is also called as a bridal wear. The kanjeevaram is also used in the making of other rich garments like sherwanis, salwar suits, shararah. The colour of this prized possession is an important factor, the saris range from all bright palette hues, adding to its vibrancy and richness. It is believed that the weavers pride in making the kanjeevarams and are so dedicated, that the intricacy of their work is reflected on the sarees. Some of the sarees take around a year or two to form right from the dyeing stage to finishing stage.