We all are familiar with the Indian Lungi, I am sure each and every household has this one piece of garment. The drape of this garment is such that it gives the wearer a lot of ease of movement and comfort. It is very open drape and is therefore preferable in hotter regions and that is why it is more worn in hotter regions like south India, Sri Lanka, Burma and even the eastern oriental countries. The Lungi is also known as a sarong. It is a traditional garment and popular in regions where the heat and humidity create an unpleasant climate for trousers. Lungi is generally woven from cotton and is available in many designs, patterns and colors. 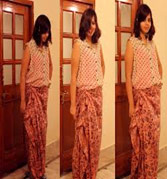 Depending on local tradition, lungi can be worn by men and/or women. They are tied or fastened in various ways, and can be used in different cultural activities, ranging from normal daily life to elaborate wedding ceremonies. There are various forms in which a Lungi can be draped, but the simplest form is where the lungi is just draped around the waist and the two ends are tied in a simple knot, however the pretzel knot is considered to be more secure. As the lungi is a draped garment the length of the hemline can be altered by adjusting the tucking at the waistline.

Available in varied prints and self woven designs the Lungi has become so much in vogue that it is considered unisex garment. The most commonly worn are those with checks or the ones in a single dark hue.


For everyday wear, people simply tie a double knot on their lungi as it is least likely to come undone. South Indian traditional garment is the lungi which is termed as the Mundu. The region close to the tropics is severely hot and humid, that is why the garment is worn by most of the folks in the southern region of India, the colour too opted is white to reflect the suns rays. The traditional wedding attire worn by the groom in the south consists of Lungi which is embellished in gold embroidery and is termed as Kasavu. 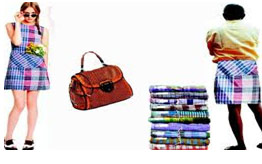 With the recent craze of the Lungi dance in the much talked about film Chennai Express, the Indian lungi is finding its place on the fashion ramps. Renowned fashion designer Wendell Rodricks has used this very Lungi garment in his Ocean Orient Spring Summer 2013 collection for the Wills Lifestyle Fashion Week, thus giving the Lungi a wider craze. The lungi craze has started all over India and fashion designers are trying to revitalize this simple garment and make it more chic. Fashion designers have given this garment a makeover. It is a style statement now.

The Lungi fabric is so simple without any motifs and woven on the simplest of loom. The fabric can be simply plain or the most common one is the striped effect on it which is yarn dyed or printed. 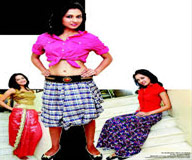 The original lungis were available in pure 100% cotton and varied from 1.75meters to 2.25 meters in length. However with the growing craze of the garment, lungis are available in varied compositions of different natural as well as synthetic fibres. The floral prints in lungis are the most recent in fashion and resemble a sarong and are even worn by men. The patchwork print in this garment with combination of various striped and checkered effect is very much in craze.

In order to maintain the ethnic look of this garment manufacturers are making this garment available in Ikat effect and also tie dyed look. The conversion of the lungi from a traditional humble garment to hi fashioned wear is very interesting. Trendsetters like the bollywood stars, models and fashion designers have created a long journey for this garment in the fashion gallery.

Designers have converted this garment with additional trimmings like an attached belt, or elasticated waistline. One can also see that the lungis nowadays are available with lot of embellishments like ruffles, laces etc. The Kalamkari print lungis have caught up among the younger crowds and look very modern and classy.

Designers are using the same styles of drapes with a touch of their creativity and converting the lungi into styles by altering the hemlines, and giving it a modern touch. Thats Creativity. The lungis are definitely moving from Kanyakumari to Kashmir, but this time in a class of its own.