Even as new yarn is developed, one that merits looking at is cotton-rich poly (lactic acid) fibre. The fibres are blended together in certain proportions so that the final product has all the positive attributes, say R. Guruprasad, G. Krishna Prasad, G.T.V. Prabu and T. Senthilkumar.

There is no perfect fibre that can impart all desirable properties required. So, cotton is generally blended with other fibres like polyester, viscose or acrylic to produce blended yarn and fabric meeting different requirements.

In recent years, there is focus on the environmental friendliness of fibres. So, it is important for a fibre to be biodegradable. Poly (lactic acid) fibre is one of the recent biodegradable fibres. Poly (lactic acid) or PLA is the first commodity polymer produced from annually renewable resources like corn, wheat starch and beet. Until now, use of PLA was limited to biomedical applications like sutures.

PLA fibres can be melt spun or wet spun, which is an advantage. Extruded fibres can then be cut into staple fibres to blend with other staple fibres. PLA fibres are generally circular in cross-section and have a smooth surface. The density of the fibre is 1.25 g/cm3 and moisture regain is 0.4-0.6per cent. The load-elongation behaviour is similar to that of wool with which the fibre blends well. The stress-strain curves of cotton, PLA and other common fibres are shown in Figure 1. PLA fibres are said to feel soft, drape better and manage moisture well. They have good wicking, facilitate faster moisture spreading and drying. Hence, blending PLA with cotton will be useful in improving drape and moisture management behaviour of cotton. Here, blending of cotton with PLA staple fibres has been studied and yarn properties were evaluated. 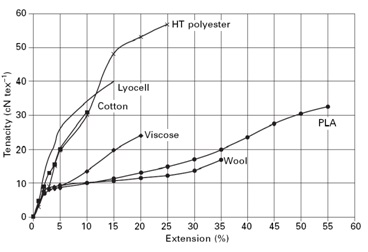 The cotton material in the study was of MCU-5 variety with a length of 30 mm and fineness of 3.3 mic. The bulk tenacity of the fibre was 25 g/tex. The length of PLA fibres was 38 mm, and its fineness was 1.4 D. The PLA fibres were mixed with cotton fibres in three different proportions, namely, 20 per cent, 35 per cent and 50 per cent. The blending was done in the blow room stage. Blended fibres were then taken through the process of carding, drawing, roving and finally spun into yarn using a compact ring spinning system to a nominal count of 14.76 tex (40 s Ne) with four different twist levels i.e 3.3, 3.6, 3.9 and 4.2. To enable comparison between the yarns, 100 per cent cotton and 100 per cent PLA yarns were also spun to the same count.

Yarns were tested after conditioning in the standard testing atmosphere of 27oC   2 C and 65 per cent   2 per cent RH for 24 hours. Yarn tests were carried out according to ASTM test standards given in Table 1. The cross section of yarns was seen using Scanning Electron Microscopy (SEM).

The yarn test results are shown in Table 2. As twist in yarn increases, there is increase in strength of yarns. However, once twist is beyond optimal level, strength of the yarns starts decreasing. Strength of the blended yarn produced is low in comparison to the strength of 100 per cent cotton yarns. As the load-elongation behaviour of cotton and PLA fibres are different, such a behaviour is expected in blended yarns. As cotton fibres have low extensibility, they will stretch first and break first. The entire load then gets transferred to the PLA component which has to bear the entire load.

As the proportion of PLA fibres is less in a cotton-rich blend, the yarn almost breaks immediately after the cotton component fails. It can be seen from the results that 100 per cent PLA fibres produce a yarn with better extensibility. However, such a high extension of PLA material is not translated into yarn extension in case of blended yarns. The SEM cross sectional pictures of blended yarns produced are shown in Figure 1(a)-(c), which shows the distribution of fibres in the blend. It can be observed from the figures that the distribution of fibres is random and the fibres are hence homogenously blended with each other. Though strength of blended yarn is less than that of 100 per cent cotton, the yarns are suitable for further mechanical processing. The yarn mechanical properties, in particular the strength values obtained, show that the yarns are suitable for knitted fabric production. 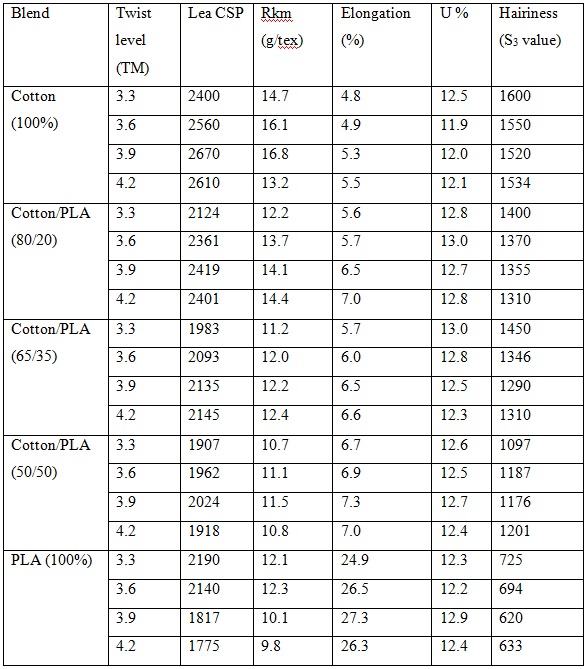 Cotton and Poly (lactic acid) staple fibres were successfully blended and spun to 40s count using compact ring spinning technology. Both fibres were blended to produce a more homogeneous blend. The spinning procedure was similar to that of conventional cotton/polyester blend processing. The SEM pictures of yarn cross section show better distribution of PLA fibres in the blend. Produced yarns have acceptable strength and are more suitable for knitwear. The optimum proportion of fibres in the blend has to be selected according to end-use requirements.