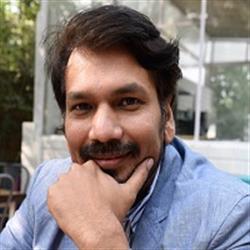 CoValor21: The new PPE on the anvil
The world is in the grip of the pandemic covid-19 and unprepared as it was, there is this major shortage of personal protective equipment for foot soldiers in the guise of personnel from the medical and police fraternity among several others. SOMESH SINGH, co-founder at the Craft Village, has designed the CoValor21 for doctors and policemen.
It is almost a war-like situation. Medical personnel are battling the covid-19 infected round-the-clock and the police too is out there keeping a watch to ensure that the lockdown is implemented. In India, this is the first such pandemic in decades and there is a woeful shortage of protective gear. The CoValor 21, taking its name from the valiant fighting the covid, has been designed with the ergonomics critical for such challenging situations.
A graduate from the National Institute of Fashion Technology (NIFT) and professor at the National Institute of Design (NID), Somesh Singh, co-founder of the Craft Village, has also served as director at the Institute of Apparel Management (IAM). He holds the position of a senior advisor at Co-Creando, Italy, and has many design patents to his credit—Paunch Proof, I-Shops, Fashion Clinics, and Folding Helmets. Singh elaborates on CoValor 21 in an interview with Richa Bansal.

Did you talk to any doctors and policemen while designing these?

I have a vast experience doing police uniforms and uniforms for pharmaceutical companies. So, I have taken that as my base and of course secondary research to begin my thought process. Now I shall share with many and seek their feedback, and once the prototype is ready, they can test this. 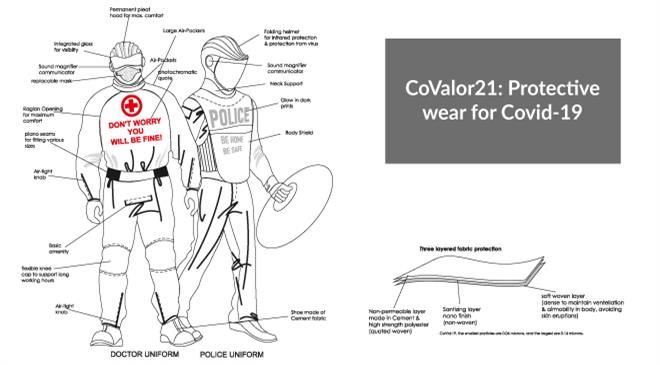 Please elaborate on both designs.

My first point is that the body is a dynamic entity, and the doctors and police work in high stress zones; so, the uniforms have in-built fragrance to help de-stress themselves, and also air-pockets for maximum breathability. As I said, I have already designed for the police and military in the past and have dealt with stress-related issues in a creative manner, which has been appreciated all over the world. Also, the message on the uniforms is very important as the patients are already dealing with sinking spirits, and positive messaging would have their will power work better.
The uniform is airtight only allowing the air to flow and blocking everything else that is less than 0.05 microns as in covid-19 the smallest particles are 0.06 microns, and the largest 0.14 microns. That would offer 95–99 per cent of protection. It also has a chip embedded so that both doctors and policemen / women do not have to carry mobile phones. Another problem is of mobile phone sanitisation and then hearing and making calls in an emergency. For this, there are detachable audio enhancers to solve listening and talking issues. The mask area is detachable so that instead of frequent changing of uniforms, post-sanitisation the old mask can be replaced.
The other critical part are the hands which are the first contact of infection. The uniform has an in-built sanitisation process, in the sleeves. In case of police, there are folding helmets which can be flattened and shipped anywhere, and also have the chip and inbuilt audio enhancers. They have glow-in-dark prints as they are on surveillance all the time and will be visible in absence of light or in dark areas in case anyone is seeking help. Police needs limited protection as they are outdoors, while doctors need full protection. The footwear is made out of cement fabric.

What is cement fabric?

It’s a fabric like any fabric that looks like faux leather or rubber. It’s a patented fabric that is waterproof, airtight and made of natural material, giving adequate protection. It is an innovation from the Craft Village stable for Craft Beton by Dalmia Bharat, and they have applied for patent as well. This is the first time that we are talking about it. We do have to do various tests to be absolutely sure and this will be done once the lockdown is over.

How eco-friendly is the cement fabric? What is its USP and other key properties?

Cement is a natural material, and despite the chemical composition to make the fabric, it is bio-degradable. The other use is in tiles and areas that require care. For example, we have made anti-slip tiles which can be laid in the washroom or play area or any other part of the house or office. Those can be used outdoors or near swimming pools as there is no wear and tear. The fabric’s USP is that it is an innovative material with its own unique character and can take on any surface—2D or 3D—and can be made seamlessly with almost all the advantage that a normal fabric does not have.

You mentioned inbuilt fragrance in the uniforms? How many washes would each last?

At least 40–50 washes, which would also keep the perfume intact.

How easy or difficult will it be to get in or out of these two uniforms?

Very simple! That is why I have two-way raglan, to have maximum opening horizontally, enabling them to wear really fast, and not waste time wearing layer by layer as in the uniforms they wear today. Plus, my design is waterproof and so it can be de-infected in a cubical later. My design also thinks of creating less garbage at the end of the process. The problem is that most uniforms today are dumped post one use, which means so much of medical waste. This design however makes it reusable after being sanitised in a sanitisation room. Thus, there is less generation of waste and also savings on uniform. For instance, if the current uniform costs ₹6,000–7,000 per set, imagine if a doctor during the treatment wears 30 in a month what would be the cost?

How much time will one uniform take to make? What will be the cost?

Speed & right-first-time concern to many mills

On a Fair Trajectory

Promotion of sustainable energy practices in garment sector in Cambodia

The fibre industry and the fashion industry are two different worlds

Tide through crisis by focusing on core strengths

Blockchain is not a silver bullet for each and every problem

Balancing tradition with a twist