Please give us a brief introduction to the Sintex Group.

Sintex Industries is the world's largest producer of plastic water tanks. It is also Asia's largest manufacturer of corduroy fabrics. Sintex has a strong presence in four continents: Europe, North America, Africa, and Asia. It is primarily into building material solutions, textiles solutions and custom moulding solutions. Its manufacturing includes a wide range of plastic products including pre-fabricated structures, industrial custom moulding products, monolithic constructions and water storage tanks. In the textiles segment, the company focuses on niche segments, specialising in men's shirting. It was incorporated as the Bharat Vijay Mills Limited in June 1931, and the same year it started a composite textiles mill in Kalol, Gujarat. In 1995, it was renamed Sintex Industries Limited. 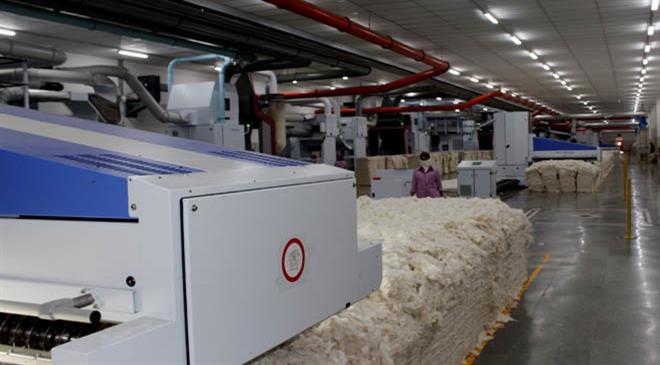 In the light of Sintex's focus over many years on other business areas, could you tell us how the plan for the mammoth Sintex yarn project emerged?

The idea to set up the plant came with the announcement of the Gujarat Textiles Policy and also from the changing dynamics in the Chinese textiles industry at that time. Subsidised interest costs under the TUFS also proved to be a major impetus along with low labour cost and power subsidy in Gujarat. As we were in touch with about 200 global buyers, the proximity to the Pipavav port came in handy. Finally, since Gujarat is a major supplier of cotton, we expected a lower logistical cost for sourcing the raw material.
The first phase of Sintex Industries-yarn division, saw the commissioning of 320,000 spindles. A total of 160+ Truetzschler cards were delivered with matching blow-room capacity. Of this, 54 Truetzschler cards are installed under one roof, and this is the first installation in India where such large number of cards are operating under a single roof. All the machines are running satisfactorily. Truetzschler machinery for the next phase is under delivery right now. The new plant with 320,000 spindles in the first phase has been completed. A similar number in the second phase is going on, and 360,000 spindles in the last phase will be completed by 2018. A total of Rs5,600-5,800 crore will be invested and once completed it will be the largest textile mill to house one million spindles at a single location in India.

What were you searching for in making choices for machinery suppliers for this project?

Our managing director, Amit Patel had a vision of a "no touch" yarn policy, right from blow-room till the yarn is packed after winding. Therefore, our focus mainly was on the most advanced and technologically superior machinery. Best in class "automation" was the keyword for us. Our project team narrowed down all such suppliers and interacted with them. We only chose those suppliers who had manufacturing capacities to match our project schedule.
Published on: 21/07/2017

Start a business built to do business today, not yesterday

Asia is going to continue to grow in terms of importance..

..we will see high growth in Eastern & Central Europe, particularly Turkey, as...

Bricks and Mortar stores will always exist, however...