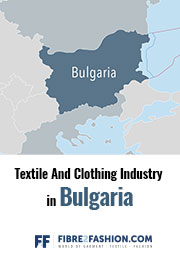 Textile And Clothing Industry in Bulgaria

Central and Eastern Europe became one of the fastest-growing regions of the world from the 1990s up to the global financial crisis in 2008. Emerging from decades of state economic control they privatized industries, introduced competition, and tapped the talents of their people to raise GDP and living standards. Since the crisis the CEE region- like other parts of the world-has struggled to reignite growth.

The importance of the Textiles and Clothing (T&C) industry in Eastern Europe varies widely from country to country. The Eastern European country profile series aims to study that how these countries are current and future stakeholders of T&C industry in Europe and what factors are making this growth prosperous.

The report covers aspects like macroeconomic development of these countries before and after becoming a member of European Union. It studies the entire structure of T&C industry in that country covering qualitative information like historical facts about the industry and the key players, to quantitative facts like investment in T&C sector, employment in T&C and various T&C clusters in that country.

It points out the various drivers, restraints and opportunities in the T&C industry. The report has wide coverage on the Export-Import trade of these countries w.r.t. textiles and clothing, how the trade has been growing and in which regions and also what are the possible trade barriers that a country is facing. The report also defines the energy cost, employment trends and wage structures to identify pros and cons of employees engaged in T&C industries in these nations. Regulations and government incentives in these countries are also listed out.

The report concludes with the industry growth outlook, the supportive facts for growth and a special comparison with the Turkish Textile industry.

An extra 10% Customization of this report is available for $100.
GET A QUOTE

Overview of the Textile & Clothing Industry in EU 28