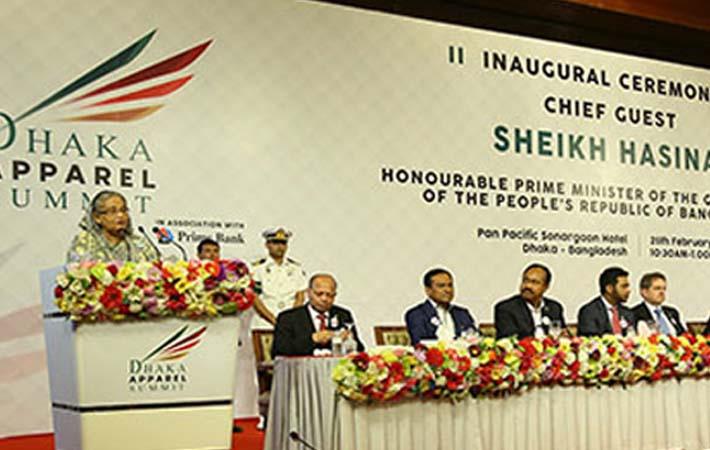 Courtesy: BGMEA
Brands and buyers should come forward to help factory owners in Bangladesh to overhaul their units, said Prime Minister of Bangladesh, Sheikh Hasina. The government will also offer its support in this regard. She also said that apparel manufacturers should diversify their products to remain competitive in the global market and explore new markets.

Short-, medium- and long-term plans should be adopted for bolstering demands for apparel and garments made in Bangladesh, said the Prime Minister at the inauguration ceremony of the Dhaka Apparel Summit held on February 25.

She said that the country needs to add value to its products as its export list is heavily dependent up on RMG. The country's exports are also limited to a few countries in West Europe and North America. Hasina said that such a situation in exports is not healthy.

The government will also extend its support to increase export earnings, she added. The RMG sector can help turn Bangladesh into a middle-income country.

Bangladesh products are exported duty free to the European markets, but the country pays about $850 million in taxes when exporting products worth $3 billion to the US. She said that as a least developed country, Bangladesh can get duty free benefits from the US.

Hasina also spoke about the safe working environment of the factories in Bangladesh and said that only 39 out of 3,869 units were closed due to poor conditions after inspections were conducted in each of them.

The Prime Minister said the government will provide all the cooperation to reach the target of earning $50 billion in export by 2021.

The second Dhaka Apparel Summit 2017 was held with much enthusiasm and spontaneous participation of speakers and audience from home and abroad. International experts and local speakers took part in three sessions on separate topics. (KD)