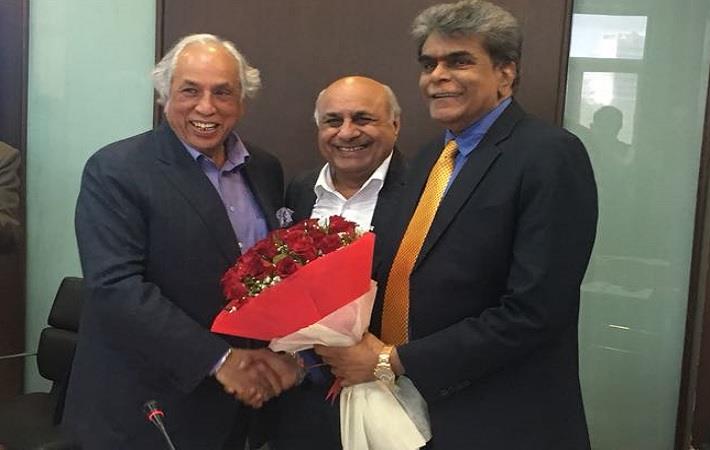 Dr. A Sakthivel (extreme right) being greeted at AEPC office; Courtesy: AEPC
Dr. A Sakthivel, well-known for placing Tiruppur cluster on the world map, has been unanimously elected as the vice chairman of Apparel Export Promotion Council (AEPC) for 2018-19. He has previously been the chairman of AEPC for three tenures in the year 1998, 2004 and 2012 and has also been a member of Executive Committee of AEPC for the last 35 years.

During his earlier tenures as AEPC chairman, he had steered projects like the Knitwear Technology Mission, the Sector Skill Council for Apparel, a national Social Compliance Project for apparel sector and several other initiatives for holistic development of the sector.

In his over four decades career, Sakthivel has held various positions including that of the chairman of Indo American Chamber of Commerce (IACC). He is the founder president of Tiruppur Exporters’ Association (TEA), which he served for 25 years.

The Government of India had bestowed him with Padma Shri in 2009 for his contribution to the apparel industry, including helping Tiruppur become the main cluster for sourcing knitwear supplies from India. As a guide and mentor, he had steered the growth of knitwear exports from Tiruppur from a mere Rs 15 crore in 1984-85 to more than Rs 27,000 crore in 2016-17.

Dr. Sakthivel has also served as the president of Federation of Indian Exports Organisations (FIEO) and currently holds the position of FIEO chairman for Southern Region. He is the first chairman of Sector Skill Council for Apparel, Made-ups & Handlooms (SSCAMH) which has the mandate to develop skills repository standards, evaluation criterion, and accreditation system for creating employability in the apparel sector.

He is also the chairman of Tiruppur based Poppys Knitwear, which exports to over 50 countries worldwide and is a trusted supplier to global brands like Marks & Spencer’s, Next, Tesco, Waitrose, Mothercare, Debenhams, John Lewis, etc. (RKS)