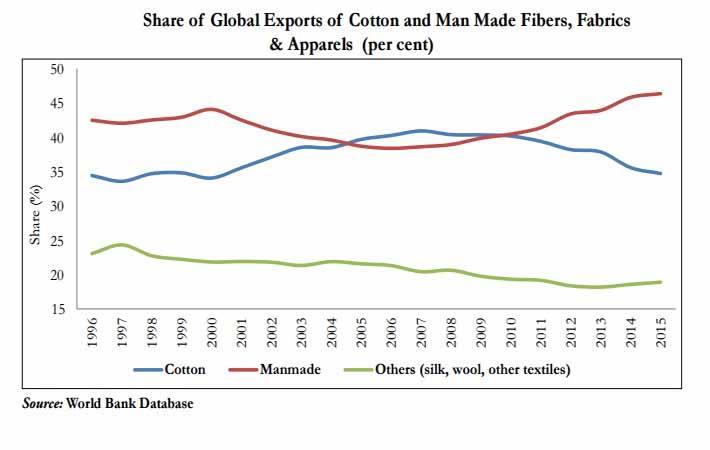 Courtesy: Economic Survey 2016-17
Apparel and leather & footwear sectors are eminently suitable for generating jobs that are formal and productive, providing bang-for-buck in terms of jobs created relative to investment and generating exports and growth. This was stated in the Economic Survey 2016-17 presented by the Finance Minister Arun Jaitley in the Parliament on Tuesday.

The Survey adds that the apparel and leather & footwear sectors provide immense opportunities for creation of jobs for the weaker sections, especially for women, and can become vehicles for broader social transformation in the country.

The Survey highlights the opportunity for India in this sector in global context by saying that India has an opportunity to push exports since rising wage levels in China has resulted in China stabilising or losing market share in these products. India is well positioned to take advantage of China’s deteriorating competitiveness due to lower wage costs in most Indian states, it adds.

The Survey also lists a number of challenges faced by these sectors. It says that the space vacated by China is fast being taken over by Bangladesh and Vietnam in case of apparels, while Indian companies struggle in face of a set of common challenges related to logistics, labour regulations, tax & tariff policy and disadvantages emanating from the international trading environment compared to competitor countries.

On logistics, the Survey says that costs and time involved in getting goods from factory to destinations are greater in India than those for other countries. On labour costs, India’s source of comparative advantage in this sector, also seem not to work in its favour due to problems like regulations on minimum overtime pay, onerous mandatory contributions that become de facto taxes for low-paid workers in small firms that result in a 45 per cent lower disposable salary, lack of flexibility in part-time work and high minimum wages in some cases.

According to the Survey, in both apparel and footwear sectors, tax and tariff policies create distortions that impede India gaining export competitiveness. India imposes a 10 per cent tariff on man-made fibres vis- a-vis 6 per cent on cotton fibres. On the other hand, domestic taxes also favour cotton-based production rather than production based on man-made fibres, and leather footwear rather than non leather footwear. The global demand for apparel is moving from cotton fibre products to man-made fibre and similarly footwear of non leather, it adds. India’s competitors enjoy better market access by way of zero or at least lower tariffs in the two major importing markets, namely, the US and the EU, the Survey says.

The Survey suggests several measures to make these sectors globally competitive and unlock its potential for creating new jobs and generating growth. It recommends that there is a need to undertake rationalisation of domestic policies which are inconsistent with global demand patterns.

Several measures have been initiated that form part of the package approved by the Government for textiles and apparels in June 2016, the Survey notes. Accordingly, textile and apparel firms will be provided a subsidy for increasing employment, but these need to be complemented by further actions. First, an FTA with EU and UK in the case of apparel will offset an existing disadvantage by India’s competitors—Bangladesh, Vietnam and Ethiopia. Second, the introduction of the GST offers an excellent opportunity to rationalise domestic indirect taxes so that they do not discriminate in the case of apparels against the production of clothing that uses man-made fibres; and in the case of footwear against the production of non-leather based footwear. Third, a number of labour law reforms would encourage employment creation in these two sectors. (RKS)