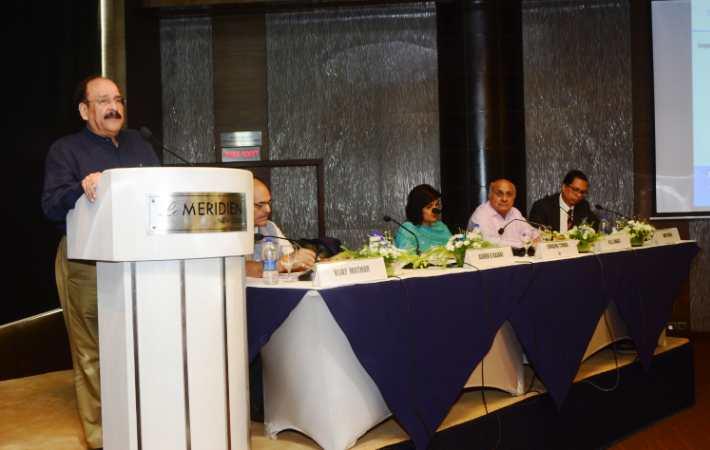 AEPC chairman Ashok G Rajani speaking at the press conference. Courtesy: AEPC
The apparel sector is buoyant after the recent announcement of Rs 6,000 crore special package by the government. Within 120 hours of the announcement the sector has pledged to invest Rs 623 crore, according to the Apparel Export Promotion Council (AEPC).

Texport Industries, Texport Syndycate and Midas Touch Export have pledged the maximum amount in Rs 623 crore, which is expected to generate 30,120 new jobs. This was disclosed at a press conference organised by the AEPC.

Speaking at the conference, Sunaina Tomar, joint secretary (exports), ministry of textiles, thanked the government for introducing labour friendly reforms. “The reforms have been initiated for the betterment of the labour, like the government bearing the employers' contribution of the EPF Scheme for those earning less than Rs 15,000 per month, for the first three years. This will leave more money in the hands of the labour,” she said.

AEPC chairman Ashok G Rajani gave an introduction and explained AEPC's approach towards the package and a roadmap to achieve the targets. “We not only have to reach the export target of Rs 30 billion that the government has set for us, but we have to go ahead and exceed that target. With our strategies and the reforms, I do not think that this is going to be very difficult,” he said.

He presented four strategies as a part of AEPC's road map: strategy for HS Code wise promotion of garments, to accelerate export growth rate in preferential market and market diversification, facilitate input availability for enhancing competitiveness and speed to delivery, and roadmap for publicity plan and review. (RKS)

Mr. Andrea Bonardi
La Perla , Asia
I would say that buying luxury lingerie is a bit like...