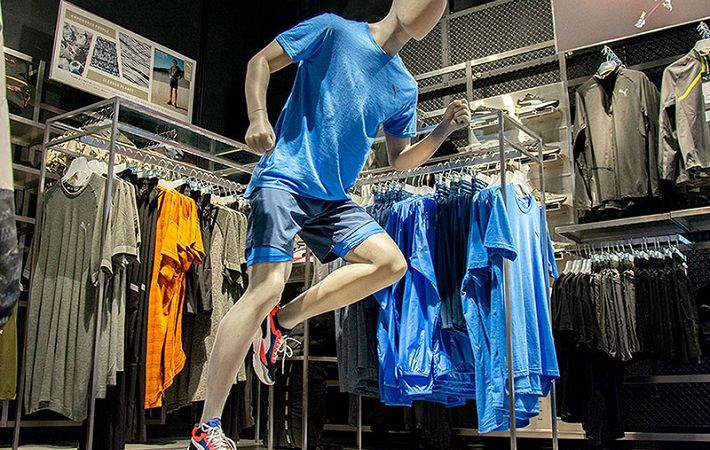 Pic: Puma
Puma, one of the world’s leading sports brands, has reported 95.8 per cent sales jump to €1,589.1 million in second quarter (Q2) of FY21 ended on June 30, 2021, against €831.1 million in same period of previous fiscal. All the regions and product divisions of Puma contributed with at least double-digit sales growth during the period, according to the company.
“The second quarter was a very good quarter for us. Despite a lot of operational issues, we saw very strong growth both in sales and profitability. Supply has been difficult with a shortage in freight capacity, harbour congestion and Covid-19 restrictions in certain sourcing countries,” Bjorn Gulden, chief executive officer of Puma, said in a press release.
Puma’s wholesale business elevated 114.2 per cent to €1,200.0 million during Q2 FY21. Whereas, direct to consumer business (DTC) surged 54.7 per cent to €389.1 million with growth in owned and operated retail stores (107.0 per cent) and e-commerce (8.5 per cent).
Gross profit for Q2 FY21 was €755.1 million (€365.1 million), while operating result (EBIT) improved to €108.9 million (loss: €114.8 million). The company’s net earnings during the quarter were €48.7 million (loss: €95.6 million).
Regionally, Puma’s sales in Europe, the Middle East and Africa (EMEA) increased 85.5 per cent to €572.4 million (€308.5 million), while Americas sales expanded 181.8 per cent to €675.6 million (€254.3 million). Moreover, sales from Asia/Pacific region were up 29.6 per cent to €341.2 million (€268.3 million).
Among the product categories, footwear sales soared 114.0 per cent to €787.8 million (€377.8 million) based on continued strong performance of brand’s running and training as well as sportstyle categories. Apparel sales grew 85.5 per cent to €522.8 million (€286.8 million).
“Demand for our products in performance, comfort and lifestyle has been strong. The cooperation with our sourcing and retail partners has become even stronger during the Covid-19 pandemic and this continued to help us in the second quarter,” Gulden added.
Considering the sales and profitability growth in Q2, Puma has increased its sales expectation by at least 20 per cent in 2021. The outlook for the operating result (EBIT) has also been specified and is now anticipated in between €400 million and €500 million, according to the company’s release.

Puma, one of the world's leading sports brands, reported 95.8 per cent sales jump to â¬1,589.1 million in second quarter (Q2) of FY21 ended on June 30, 2021, against â¬831.1 million in same period of previous fiscal. All the regions and product divisions of Puma contributed with at least double-digit sales growth during the period, according to the company.
More Puma AG News... More Apparel/Garments News - Germany...