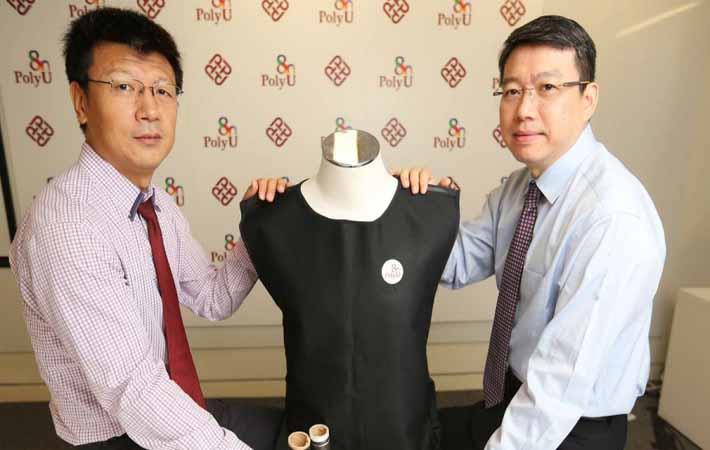 Courtesy: SCMP
Scientists in Hong Kong have combined tungsten and polyurethane to create a garment that offers 40 per cent more protection during X-ray procedures. Conventionally, lead is used to protect people from radiation during X-ray procedures. The new garment is also 22 per cent lighter. The research has been carried out at Polytechnic University.
While lead has long been used to shield patients from radiation, its toxicity poses a health threat if the protective vests containing the metal wear out or the lead gets damaged.
The new protective shield has been created by mixing the metal used in light bulb wires with a common plastic. The team adopted a new, patented technology to transform tungsten - one of the densest metals - into tiny particles one-tenth the width of light bulb wire. These were then mixed with polyurethane, a highly elastic material, and turned into a new kind of composite garment, according to a report of a leading Hong Kong daily.
"The material is non-toxic and can be recycled and processed into protective clothing," said Fei Bin, associate professor at the university's institute of textiles and clothing, who led the team.
Because of the elasticity, the shielding vest stays protective even after being folded. It can be used for up to three years before needing to be checked for safety, while lead vests require annual testing.
Although tungsten is more expensive than lead, researchers expect the new product will be cheaper as less metal is used.
Professor John Xin Haozhong, head of the institute, who jointly invented the material with Fei, revealed that the inspiration to invent better protective gear came after the Fukushima nuclear accident in 2011, which was the largest disaster of its kind after Chernobyl in 1986. "There are also nuclear plants close to Hong Kong, such as the one in Daya Bay. How could we protect people better with lighter materials from radiation harm?" Xin said, according to the report.
The team hoped the new garment could serve patients who needed X-rays and health care workers in radiology departments who faced daily risks. The university is exploring commercial opportunities and expects the product could be made available in six months to a year if any companies showed interest in production. (SV)