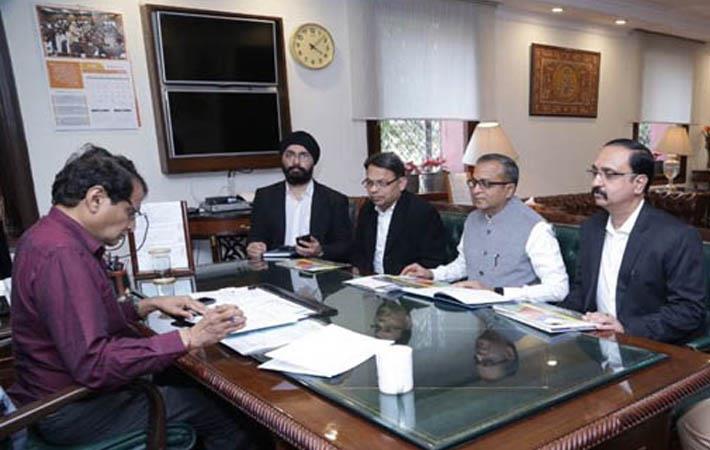 ITF delegation with Union commerce minister Suresh Prabhu (left)
Apparel imports from Bangladesh into India are growing at a fast pace, and this trend is actually helping China’s textile exports, the Indian Texpreneurs Federation (ITF) has said in a letter to Union commerce minister Suresh Prabhu. ITF suggested tweaking rules of origin to make the use of yarn and fabrics of Indian origin mandatory for duty-free access.

“India’s apparel imports from Bangladesh grew 27.8 per cent in FY15 and 17 per cent in FY16. Though it dropped 2.7 per cent in FY17 because of the slowdown in India’s overall imports, it has resumed pace in FY18 if imports in the first half of the fiscal are any indication,” the letter said.

Since Bangladesh does not produce enough fabrics domestically, allowing duty-free quota-free import of apparel from Bangladesh (under SAFTA) is indirectly helping China. Moreover, it is also slowly and softly killing India’s domestic textile value chain comprising apparel-fabrics-yarn-fibre, an ITF delegation said during their meeting with Prabhu this week.

India will not be the first country to impose such sourcing restrictions for allowing duty-free imports of apparel. The US has imposed sourcing restriction under NAFTA for accepting duty free import of garments from Mexico and other NAFTA members. The Asean-Japan FTA also mandates apparel exporters based in Asean countries to use fabrics and other raw material either made in Japan or any of the Asean countries to avail preferential trade regime, the delegation said.

ITF is appointing one expert firm to prepare a report on “Competition analysis study for Textiles Sector FTAs & Growth Prospects’’. The firm will prepare a report in next 60 days and it will be submitted to both the commerce and textile ministries. (RKS)