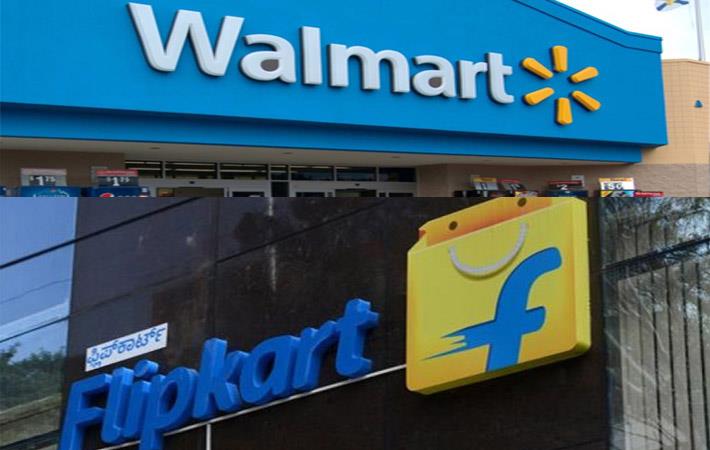 Only a year back, the e-commerce landscape was dominated by two players: Amazon and Flipkart. With the acquisition of Myntra and Jabong by Flipkart, it would have appeared as though a process of consolidation had set in, and that the years to come would see the two in a no-holds-barred fight.

Now, with the buying of Flipkart by American retail giant Walmart in May, things have changed in a way, and yet in many ways they remain the same. It would still remain a war between two big players, only that now it will be fought between two multinationals. Both have the monies to sustain themselves for the long haul, and both are known to be ruthless in carving out market shares.

Innumerable stories had been doing the rounds all through this year about Walmart making moves on acquiring a majority share in the debit-ridden Flipkart. There were even reports of Amazon itself being interested in buying out Flipkart, as there were reports of Google-parent Alphabet being in talks to invest about $3 billion for a roughly 15 per cent stake in Flipkart. All those speculations were set to rest on May 7 when the big announcement came: that Walmart would be paying a whopping $16 billion for a 77 per cent stake in the Indian company. The deal now awaits clearance from India’s anti-trust regulator and is expected to close later this year.

The world’s largest e-commerce deal was an all-cash transaction, with Walmart purchasing new shares of Flipkart worth $2 billion and buying a stake worth $14 billion from the firm’s existing investors. Within the first year of the closing of the deal, Walmart was said to be planning to pump in another $3 billion into Flipkart, founded in 2007 by former Amazon employees Sachin Bansal and Binny Bansal. The deal, which still needs regulatory approval, would have to close by March 9 next year failing which it could be terminated, as per the filing that Walmart made with the US Securities and Exchange Commission (SEC). In comparison with the Flipkart deal, Walmart had paid only $3 billion for e-commerce site Jet.com, which it had acquired two years ago.

The new board at Flipkart will have eight members, including five directors appointed by Walmart. Walmart founder Sam Walton’s grandson, Steuart Walton, may join the board of directors. Other minority shareholders will get to nominate two directors, besides co-founder Binny Bansal who will continue as a board member. Other minority shareholders after the deal will include China’s Tencent Holdings, US hedge fund Tiger Global Management and IT giant Microsoft Corp. Walmart may in the future appoint a sixth board member with the approval of the majority of the Flipkart directors. Walmart can also appoint or replace Flipkart’s chief executive and other key executives of group companies in consultation with Bansal and the board of directors.

Walmart will have a veto right “over specified decisions relating to Flipkart’s business and activities,” the SEC filing said, without sharing more details. Walmart will also have the say on the appointment or removal of top executives at Flipkart and its group companies, PhonePe and Ekart. “Walmart may appoint or replace the chief executive officer and other principal executives of the Flipkart group of companies, subject to certain consultation rights of the board and the founder,” the SEC filing said.

The acquisition would include Flipkart’s other properties like fashion e-commerce sites Myntra and Jabong, digital payments firm PhonePe and logistics company Ekart. The Flipkart-Myntra-Jabong set of portals commands about 70 per cent of the market share in fashion. Ekart is present in over 800 cities and towns across the country, and makes over 500,000 deliveries every day.

But the American shopping giant is in here for e-tail, not retail.

According to Walmart’s own investor presentation, India’s e-commerce market is expected to grow four times faster than overall retail over the next five years. While the consolidated retail segment will grow only 9 per cent between 2017-18 and 2022-23, the corresponding figure for e-commerce is 36 per cent. This growth will be driven by smartphone penetration which is expected to grow from 30 per cent in 2017 to 58 per cent in another three years. Morgan Stanley estimates that India’s e-commerce market will grow from $38 billion to $200 billion in a decade from now.

But it’s not the existing size of the market that would have lured in Walmart. After all, according to a different estimate (by eMarketer), Indian retail e-commerce sales in 2017 were only $21 billion compared to $1.11 trillion in China. The same estimate believes that India’s e-commerce sales will jump 141 per cent in the next four years alone—it’s the market to be in.

Walmart’s strengths lie in logistics, sourcing and supply chain management, and has not been able to capture the e-commerce market in the way that it dominates retail—its own online sales are a little over 3 per cent of its business in the US. In contrast, close to half the total e-commerce market in the US is controlled by Amazon. With the Flipkart acquisition, Walmart would want to bridge the physical-digital gap, and India would be the testing ground. Walmart’s current presence in India is limited to its 21 cash-and-carry stores and one fulfillment centre in 19 cities across nine states. It had entered India in 2009 through a joint venture with Bharti Enterprises, and took full control in 2013.

As things stand now, Walmart plans to support small businesses through direct procurement as well as by increased opportunities for exports through global sourcing and e-commerce. “Among other initiatives, Walmart will partner with kirana owners and members to help modernise their retail practices and adopt digital payment technologies,” the company said in a statement. Walmart also plans to launch another 50 new cash-and-carry stores in the next 4–5 years.

So, food and groceries—something that Flipkart had unsuccessfully tried its hands at earlier—would be one of the main focus areas. Amazon India has its own Amazon Pantry and Amazon Now (wherein it partners with local retain chains in Bengaluru), and there are a number of relatively small-time players in a number of cities that supply vegetable and groceries, including BigBasket and Grofers.

As Amazon battles with the Flipkart-Jabong-Myntra group in fashion, it will now have to grapple with Walmart in food and groceries, where the latter holds sway everywhere, particularly in the US. Amazon is already fighting it out with Walmart in the US with its recent Whole Foods Market venture. For its part, Walmart has been concentrating more on developing markets for a share of the grocery pie. Only last month, it gave up control of its UK grocery chain, Asda, merging it with British rival J Sainsbury Plc. Walmart will retain a minority 42 per cent stake in that combined company.

In the Flipkart ecosystem, Walmart was also said to have been particularly interested in the Myntra and Jabong fashion-centric portals. Walmart has been trying to enter the fashion e-space that is brutally dominated by Amazon in the US, but not so much in India. Walmart has already acquired Bonobos and ModCloth, and partnered with department-store chain Lord & Taylor.

The e-commerce war will spill over into the brick-and-mortar theatre too. As of now, the e-commerce is far to minuscule compared to the retail marketspace of about $750 billion, most of which (estimated to be 90 per cent) falls in the unorganised sector. With the most-likely Flipkart re-entry into the food-grocery business (backed by Walmart’s own expertise in the area) there is bound to see a rethinking of strategies on part of retail chains like Reliance, Future Group, Tata Group, D’Mart (Avenue Supermarkets), Aditya Birla Group, Landmark, Metro (Germany) and Shoppers Stop. The food-grocery segment is said to be the largest in terms of overall consumer spending. The cascading effect of this is likely to be felt first in the logistics and food processing businesses.

Most of the post-acquisition debate has hovered over Walmart’s decision to take over a company that has been bleeding. Flipkart’s share of the Indian e-commerce market grew from 31.5 per cent to 35.7 per cent between 2016 and 2017, according to Bloomberg Intelligence and Euromonitor Passport. Over the same period, Amazon’s share grew from 24.5 per cent to 27.7 per cent. Both grew at the expense of smaller players, that started getting wiped out one by one.

Flipkart’s revenues grew 29 per cent last year to $3 billion, but much slower than the growth of 50 per cent in 2016. The net losses at the same time grew by an unnerving 68 per cent to $1.3 billion. In other words, Walmart bid $16 billion and valued the unprofitable Flipkart at about $20.8 billion, at roughly seven times the sales figures of last year. To turn Flipkart profitable would be quite a task.

Minority investors holding 60 per cent of Flipkart’s (minority) shares “acting together, may require Flipkart to effect an initial public offering” (IPO) four years after the close of the Walmart-Flipkart transaction, Walmart said in a May 11 filing with the SEC. The IPO should be done at no less a valuation than that at which Walmart invested in the Indian e-commerce firm, the filing said.

Not everyone was sold on the deal—shares of Walmart fell 4 per cent on May 9 triggered by a belief that it had made a terrible decision in acquiring a loss-making company. The drop was driven by “scepticism about the cost of the deal” as well as the cynicism around whether the deal will really help Walmart gain ground against arch rival Amazon in India, the Wall Street Journal reported. Almost $10 billion of Walmart’s market capitalisation was said to have been wiped out.

S&P lowered Walmart’s outlook to negative from stable, citing increasing leverage and risks stemming from the company’s spending to expand online and globally as it continues its share buyback programme. Walmart was rated AA, the third-highest investment grade. The negative outlook shows there’s “about a one-in-three chance” that Walmart’s strategy shift could result in a downgrade over the next two years, the credit-ratings company said in a statement.

Others do not concur. Rating agency Moody’s in its Credit Outlook report the very next week felt Walmart’s acquisition was “credit positive” for the US retail giant. Moody’s said it expected the deal to initially weaken Walmart’s credit metrics, with retained cash flow (RCF) to net debt ratio likely dropping to the low-30 per cent range from 40 per cent currently and debt to EBITDA (earnings before interest, tax, depreciation and amortisation) ratio likely to double from 1.6 times currently.

“Despite this deterioration, the acquisition is credit positive because it provides immediate scale in India’s burgeoning retail e-commerce sector and we expect that a combination of increased cash flow and debt reduction will push the RCF/net debt ratio back above our 35 per cent. Although we expect that Flipkart will continue to generate losses for the next few years, our credit-positive view is based on India’s compelling features, including its 1.2 billion residents and an economy that generates more than 7 per cent annual GDP growth,” Moody’s said.

The reason for this rating echoed what the same reasoning that Walmart would have had in acquiring Flipkart: a prospective Indian market. “India is one of the most attractive retail markets in the world, given its size and growth rate,” Walmart’s president and CEO Doug McMillon had said. Moody’s agreed: India has more than 400 million millennials, a growing middle-class and exploding smartphone penetration, all of which are critical as shopping continues to shift online. Following the announcement, we affirmed Walmart’s Aa2 rating and stable outlook.”

But what is definitely certain is that the retail/etail is up for some action in the days to come. (WE)