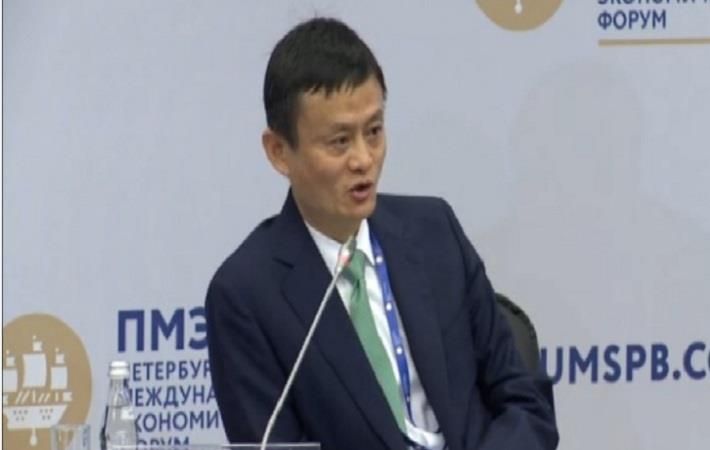 Jack Ma/Courtesy: Alizilla
China's most visible internet entrepreneur, Jack Ma, who heads the Alibaba Group, envisions the creation of a global online trading platform replete with virtual free trade zones for small businesses to enable small businessmen in one country sell to consumers in another, without having to pay import duties and with speedy customs clearance.

“Imagine if SMEs could buy and sell products anywhere in the world with mobile phones and PCs,” said Jack Ma, Executive Chairman of the Alibaba group which owns online B2C site Alibaba.com at the St. Petersburg International Economic Forum, a three-day international conference on economic issues confronting Russia and the world.
China's most visible internet entrepreneur, Jack Ma, who heads the Alibaba Group, envisions the creation of a global online trading platform replete with virtual free trade zones for small businesses to enable small businessmen in one country sell to consumers in another, without having to pay import duties and with speedy customs clearance.#

“We should build special rules and laws to help small guys move forward. We need global free trade zones for small businesses, or e-hubs,” Ma said, adding that Russia could be a logical host for a hub connecting Asia and Europe.

Appealing for a reduction in trade barriers and protectionist policies across the world, he pointed out that in most countries SMEs contribute to more than half of their GDP and an even higher percentage of employment.

Yet SMEs are shut out of global markets by obstacles such as complex regulations and market-entry regimes that only large companies can navigate, as well as a lack of access to financing, he said adding that “over the past 20 or 30 years, financial systems were designed for the 20 per cent of companies that are big multinationals, leaving 80 per cent of the businesses with no space to grow.”

“Let's do something simple and easy to move things ahead,” he said proposing the creation of an Electronic World Trade Platform or (eWTP), a web-based body driven by small businesses that he envisions as a successor to the World Trade Organization.

“The WTO did a wonderful job in past years, and I think globalization is good,” he said. But the WTO has failed to make progress for many years because of conflicts among member governments and multinational corporations, many pushing protectionist trade agendas.

“We recommend G20 countries to support the Electronic World Trade Platform, which should help to support a new and more open way for global trade,” added Ma, who is the chairman of the B20 SME Development Task Force, a G20 advisory group.

In this direction, he urged the G20 nations to set up free-trade zones that would enable small businesses worldwide to bypass complex regulations and protectionist trade policies that hinder global commerce.

This would include not only the establishment of the eWTP but also setting up a digital version of the fabled Silk Road trade routes between Europe and Asia, Ma said

During the forum, Ma spoke on a range of topics, among them ways to address the problem of a vanishing middle class around the world, and how G20 countries ought to create a new type of visa to allow entrepreneurs to travel more freely. (SH)