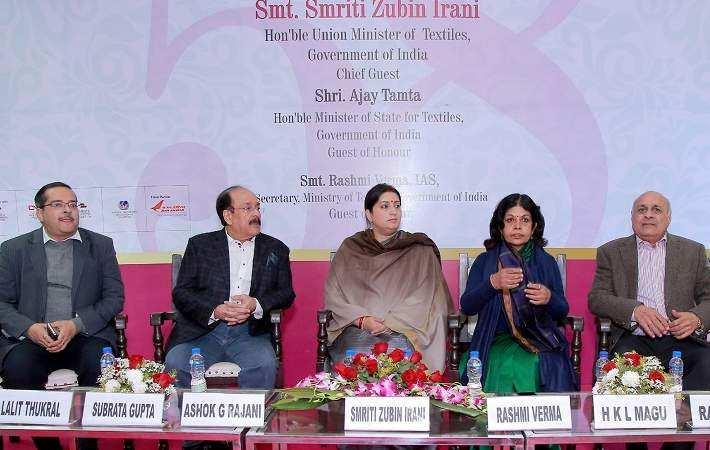 Union textiles minister Smriti Irani at the inauguration of IIGF in New Delhi with textiles secretary Rashmi Verma and other dignitaries. Courtesy: PIB
The textile ministry has received a sum of Rs 500 crore from the finance ministry for reimbursing garment and apparel exporters for state levies that were paid by them. The reimbursement will start from next week onwards. The Rebate of Stat Levies (ROSL) scheme is part of the Rs 6,000 crore special package that the sector that was approved last year.

Most of the schemes that were a part of the special package have already been implemented and the textile ministry has received Rs 500 crore for the ROSL scheme to reimburse exporters for state levies, said Rashmi Verma, textiles secretary, during the inauguration ceremony of the 58th India International Garment Fair (IIGF) in Delhi.

She also said that a number of exporters have already paid their claims to the customs department and they will be reimbursed from next week onwards.

Verma also added that she hopes that the country’s garment and apparel manufacturers will utilise the package for setting up new units to attract more investments, create jobs and emerge as a key player in the international textile market. India has a huge opportunity to grow as china is currently ceding space and the exporters should take full advantage of this opportunity.

The special package will ensure a level playing field for Indian exporters in the EU and US markets as the lack of FTA between India and EU countries results in a 9.5 per cent duty on their products.

However, delays in the roll out of the special package and stagnation in US and European markets resulted in a 0.2 per cent decline in exports during April – December 2016, as compared to the same period in the previous fiscal, said Ashok G Rajani, chairman of Apparel Export Promotion Council.

The special package was approved in June 2016 with a view to create 1 crore new jobs in the next 3 years, generate $30 billion in exports and attract investments worth $11 billion.

Union textiles minister Smriti Irani, who inaugurated the fair, said that with 312 participants from 14 states coming together, IIGF is one of the largest platforms in Asia showcasing apparel & accessories. With the presence of 246 registered buying houses, IIGF will facilitate international buyers to source products and form collaborations.

Irani also said that more than 1000 buyers are participating in the fair, so that they can leverage the talent that India has to offer. She added that platforms like IIGF are very cost-effective for newly exporting small and medium enterprises which use these platforms very effectively.

As many as 1,081 buyers have confirmed from 94 countries across the world for IIGF. India’s fourteen states are participating, with major participating states being Delhi-NCR, Rajasthan, Maharashtra, Uttar Pradesh, West Bengal, Haryana, Tamil Nadu, Punjab, Gujarat and Karnataka. (KD)