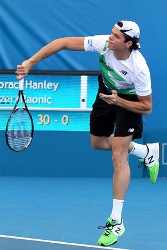 New Balance has a history in tennis creating innovative performance footwear and apparel. With the addition of Milos Raonic, one of the ATP’s fastest rising players, to the New Balance athlete roster the brand looks to expand its global tennis footwear business and launch a directional apparel line inspired by Milos and the brand's rich history.

Milos will debut his New Balance footwear and apparel on the court at the Brisbane International in Australia just two weeks before the start of the Australian Open Tournament.  New Balance will work with Milos to launch a new tennis focused collection of footwear and apparel in August 2013 just before the US Open tournament giving tennis enthusiasts and players access to industry-leading gear.

"I am very excited to partner with New Balance Tennis,” said Raonic.  “They have given me a great opportunity to have input in the design process and their dedication to making great tennis shoes gives me the confidence to excel on the court. They are a strong family-owned company that I am honored to represent."

“Milos is a talented, young athlete and a fine young man who consistently shows confidence, passion and a drive to improve both on and off the court,” says Bruce Schilling, General Manager of Tennis at New Balance. “New Balance is one of the fastest growing athletic brands in the world and we are proud to have Milos, a rising star in the tennis world, join our family and help New Balance to continue to deliver innovative high-performance products.”

As a global brand ambassador and face of New Balance Tennis, Raonic will appear in New Balance’s marketing and communications campaigns including print, online and in-store advertisements.  New Balance shares Milos’ desire to give back to the community and will support The Milos Raonic Foundation, a charitable organization launched by Milos in November 2012 to benefit disadvantaged children.

A Canadian citizen, Raonic has experienced a meteoric rise in the world rankings, having climbed from #152 to #37 in just one month, after reaching the fourth round of the Australian Open and winning his first ATP title at the 2011 SAP Open.

Since then, Raonic has captured a title in Chennai, defended his SAP Open title for the second consecutive year, and set the record for the longest two-out-of-three set Olympic match in history with his battle against Jo-Wilfried Tsonga at the 2012 London Olympics.  Raonic is currently the top North American on the ATP World Tour and among the next generation of great players due to his powerful serve and forehand.

Raonic is represented by CAA Sports, a division of Creative Artists Agency (CAA), the world’s leading entertainment and sports agency, which represents more than 700 of the world's best athletes in such sports as baseball, football, hockey, basketball, soccer, golf, and tennis.