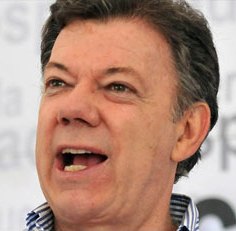 President Juan Manuel Santos
The Latin American country of Colombia has announced imposition of US$ 4 per kg tariff on imports of textiles and apparels into the country.
The announcement was made by President Juan Manuel Santos during the inauguration of Colombiatex 2013.
The President said the new tax has been announced to protect the country against unfair competition. He said there has been an increase in low-cost textile and apparel imports in recent period, which is a threat to Colombia’s domestic textile industry.
While uniformly imposing a US$ 4 per kg tariff on all textile and clothing imports, the existing tax on the same has been reduced from 15 percent to 10 percent. As a result, the new measure will only affect imports of very low-cost textiles and apparels.
The tariff will be uniform for imports of clothing from all countries and will be initially applicable for six months. However, the period of levying of the duty can be extended further depending on the conclusion of an ongoing study on anti-dumping.
Around 475 exhibitors are participating in Colombiatex of the Americas 2013, the most important textile-clothing chain event in Latin America featuring the most extensive range of textile raw materials, including chemicals, fibres, yarns and filaments; machinery for textile and clothing sector; as well as apparels, including industrial wear.
Around 1,500 buyers from several countries including Ecuador, India, Brazil, Italy, Peru, Mexico, Turkey, Portugal, Spain and the United States are likely to visit the three-day fair that concludes on January 24, 2012.
Carlos Eduardo Botero, director of Inexmoda, organizer of the fair, expects the sales at Colombiatex to touch US$ 120 million, same as that achieved in 2012.