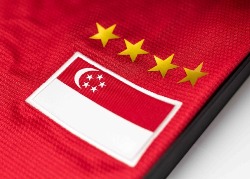 Nike launched a limited edition run of the 4 Stars national team kit today, with just only 100 exclusive collector’s box on sale. It was only made available at the Nike store in Suntec City, with all 100 national team kits snapped up within two hours of the launch.

To commemorate the Lions’ historic fourth Asian Football Federation (AFF) Suzuki Cup win last December, Nike produced an away jersey featuring the fourth star, and ‘Champions’ on the back. There was a high demand for the 4 Stars Singapore national team kit from fans, after seeing the Lions don the kit as they hoisted the championship trophy last December in Bangkok, and during the welcome home celebrations at Jalan Besar Stadium.

The exclusive collector’s box features the four stars imprinted in gold, with a serial number to identify the limited run. The inside of the box featured individual stories from  AFF Championship-winning captains, Nazri Nasir, Aide Iskandar and Shahril Ishak, who have captained the Lions to victories in 1998, 2004, 2007 and 2012.

AFF Championship-winning captains, Nazri Nasir, Aide Iskandar and Shahril Ishak, were present at the event, to meet and share their inspirational 4 Stars stories with the youth captains from the National U21 and U15 teams.

Nike Singapore Country Marketing Manager Vijaya Kumar Jayaraj said, “Winning the title for the fourth time is a historic moment for the Lions and their fans, and it was fitting that the moment was commemorated. We hope that introducing the winning captains to the next generation of athletes would inspire them to aim for the fifth star for Singapore.”

AFF-winning captain Aide Iskandar, who led the Lions to victory in 2004 and 2007 echoed this sentiment, “I hope that sharing our stories today will inspire the young players and help them understand what it takes to succeed in football.

The support and response from the fans has been inspiring, and I am sure there are a lot of supporters out there who would feel proud to wear the national team kit, and be reminded of the Lion’s achievements,” added Aide, who is the only player to have been involved in all four AFF Championship-winning teams, having won three as a player and the latest as part of the coaching staff.

One young player who is certainly inspired is talented national U18 star Adam Swandi, who has been touted as one of the brightest prospects to emerge in recent years, having burst onto the scene during the Lion City Cup in 2011. “It was great that we were able to hear from the AFF Championship-winning skippers like Nazri, Aide and Shahril first hand on their experiences on winning the region’s biggest tournament,” said Adam. “I am certainly inspired by these stories and can’t wait for the time when I get to don the senior national team kit, and hopefully do my country proud.”