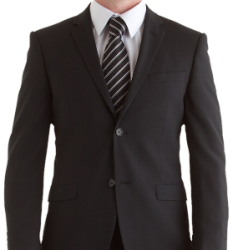 Combat Gent, the online haberdashery, launched its website with the goal to equip adventurous and urban guys with the attire they need to succeed. Additionally, the company introduced a new suit line – creating the only suit you'll ever need - as well as a new tie and bow tie collection.

The new Combat Gent slim-fit suit is meant to go beyond the first interview, taking the "combatant gentleman" through life's milestones that call for a certain level of dapperness while still offering versatility for any occasion. The Combat Gent suit is made for the man who wants quality clothes and wants to look the part without depleting his bank account.

Combat Gent suits are:
- Available in three colors: black, blue and gray
- Made of 65 percent wool using super 140s worsted wool sourced in Italy, which holds the suit's form and minimizes the need for dry cleaning
- Adorned with smart slim lapels measuring in at 2.5" at their widest points
- Matched by classic horn buttons and silk lining to reduce the pants' static cling


The vision for Combat Gent came from Vishaal and Mo Melwani -- they knew that men wanted to spend their money on things other than clothes. Their goal was to create a trend-forward, well-made, yet moderately-priced, fashion brand guys would be proud to wear. Because Vishaal and Mo grew up in the fashion world, they know what it takes to create ready-to-wear garments. The Combat Gent team cuts and sews each garment in Los Angeles and pays close attention to the details of each clothing item.

"Mo and I come from a very high-fashion background so in addition to having business skills and being tech savvy, we uniquely bring our knowledge of fit, style, form and function to the table," said Vishaal Melwani, CEO and creative director for Combat Gent. "By enlisting our skills in garment production and using the direct-to-consumer model, we're equipping guys with the attire they need and can be proud of without asking them to break the bank."

Combat Gent is a place that equips men with the attire they need to get the job done. Unlike other men's fashion sites that don't know fashion or understand the needs of their customers, Combat Gent's founders identify with the highly-motivated, adventurous and urban gentleman that wants to look his best without having to sacrifice his lifestyle to afford it.