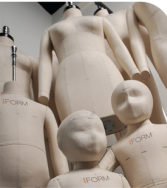 New Technical Fit Forms Will Facilitate Better Fitting Clothes for Mexican Consumers Apparel brands, retailers and manufacturers selling in Mexico now have a powerful new tool to aid in the design and production of garments that fit. The New Mexico Standard AlvaForms are a series of technical fit mannequins created by Alvanon, the global fashion industry’s leading fit expert, and based on Alvanon’s analysis of the recent Size Mexico body scan campaign.

According to Alvanon President Ed Gribbin, the AlvaForms will benefit the Mexican apparel industry, as well as Mexican consumers. “The most obvious benefit to consumers will be better fitting clothes,” Gribbin says.  “For retailers and brands that means improved sell through, conversion rates, customer satisfaction and brand loyalty. On the manufacturing side, the standard will speed time from design to production and facilitate greater quality control.

“Marketing clothes that fit consumer bodies better will be a huge boom for the Mexico fashion industry,” Gribbin continues.  “The brands taking advantage of this new technology that helps apparel fit will separate themselves from brands that don’t.

Alvanon fit experts use body scans, coupled with knowledge of human anatomy and pattern construction, to create the optimum AlvaForm for specific target demographics.  The finished forms replicate the shape, balance and posture of the real human body, enabling designers and manufacturers to create garments that best conform to a region’s dominant body shapes.

The new Mexico Standard AlvaForm is based on thousands of body scans captured throughout Mexico by Mexican apparel industry chamber CANAIVE in conjunction with Wal-Mart de Mexico, French fashion software firm Lectra and CVS Group. The survey, which revealed the average weight, height and body measurements of Mexicans from 14 cities across the country, is expected to save Mexico’s apparel industry $400 million by 2017 in reduced merchandise returns.

“We were anxious to see what the data would tell us,” says Gribbin of the survey results, which were released in March 2012. “Clothing fit is a concern everywhere in the world. At CANAIVE there was concern about clothing built on specs that were U.S. related or just outdated industry data in Mexico.  It was time, with all the other size studies being done around the world, for Mexico to support its clothing and retail industries and, most importantly, end user consumers with accurate sizing data.”