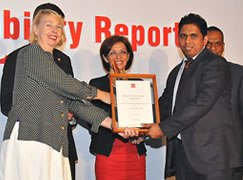 The report, a first by a private company in Sri Lanka, was released by Brandix in September 2012 as a detailed disclosure of the Group's achievements in eco-friendly operations and sustainability, as well as its road map for future improvements in sustainability. Titled 'Wear the Future,'the 100-page report committed Sri Lanka's largest apparel exporter to a further 20 per cent reduction in its environmental footprint by 2020.

The prestigious ACCA Sustainability Reporting award, which is endorsed by the Ministry of Environment and the Global Compact Network Ceylon, was received on behalf of Brandix by Iresha Somarathna, the Group's Head of Environment & Energy Management, at the 20th February ceremony.

"Great efforts were made to ensure that our first sustainability report was as precise and as comprehensive as possible, so that it could also serve as a learning tool for others committed to the goal of sustainable manufacture," Brandix Group Director AJ Johnpillai said. "It is therefore most encouraging that a body of the calibre of ACCA has recognised its value with this prestigious award."

Alongside the release of the sustainability report, Brandix announced it was developing its own Eco Index, a ground-breaking environmental assessment tool that would enable companies Group-wide as well as supply chain partners to benchmark and measure their environmental footprint.

The report also detailed the initiatives that had enabled the Group to reduce its carbon footprint by 30 per cent well ahead of the December 2012 deadline, reduce water consumption at apparel factories to 35 litres per head per day, and achieve zero solid waste to landfill by the end of 2012. It covered the environment, economic and social performance of the Group between April 2011 and March 2012 and provided an insight into the Group's business functions, sustainability strategy, approach to environmental outputs of processes as well as the distribution and supply chain, the Group's community projects and its people.

Brandix was the first apparel manufacturer in the world to receive the ISO 50001 certification for the energy management systems of its Eco Centre at Seeduwa. In 2008, the Brandix Eco Centre became the first apparel factory in the world to receive a Platinum rating from the Leadership in Energy and Environmental Design (LEED) Green Building Rating System of the US Green Building Council (USGBC). To date, four Brandix business units have received LEED certification.

The Brandix Group, which operates 42 facilities in Sri Lanka, India and Bangladesh, is credited with being the pioneer of the concept of 'total solutions' in Sri Lanka's apparel sector and is a global leader in eco-friendly manufacturing operations.