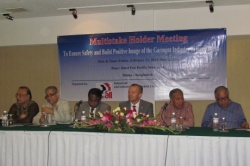 A multi-stakeholder meeting in Dhaka convened by IndustriALL underlines need for urgent progress on workers’ rights, minimum wages and fire safety in order to secure a sustainable future for the garment industry in Bangladesh.

The meeting on 22 February 2013 was attended by representatives of all main players related to the Bangladeshi ready-made garment industry, including the Minister of Industry and the Secretary of Labour, representatives of major brands and buyers such as H&M, PVH and Tchibo, trade unions representing garment workers, employers’ association the Bangladesh Garment Manufactures & Exporters Association BGMEA, International Labour Organization (ILO) as well as national and international non-governmental organizations and partner unions.

After horrific fires at Tazreen Fashion and Smart Fashion factories in Dhaka area resulted in death of at least 120 garment workers and many more injured, IndustriALL addressed the Government of Bangladesh, national employers and international buyers in an urgent discussion on a concrete plan of action.

According to IndustriALL, such plan of action had to include strict health and safety regulations, efficient inspection and union participation in workplace cooperation, ensuring freedom of association in line with internationally recognized ILO labour standards, and a program to raise minimum wages to at least living wage levels in the country.

Participants to the multi-stakeholder meeting expressed their concerns and opinions and came to a common understanding and set of conclusions as follow:

- Increasing pressure from European and North American consumers requires urgent improvements on workers' rights, minimum wages and fire safety in order to secure a sustainable future for the industry

- The Ministry of Labour is in the process of finalizing a revision of the Labour Act 2006, after ILO Committee of Experts deplored the lack of progress in bringing it in line with ILO norms

- Recently 8 new local trade unions have been registered, but further efforts on organizing workers and facilitating the registration procedure are required

- Minimum wage of 3,000 BDT ($38 US) per month is below a living wage, so an urgent raise is needed, followed by annual revisions

- Co-operation and input of all stakeholders is needed to improve fire safety. A national action plan based on the Tripartite Statement on Fire Safety from January will be finalized by the end of February. Buyers and unions emphasized the need to agree on one comprehensive program, which would bring together various initiatives including the MoU on Fire Safety that IndustriALL continues to promote.

Jyrki Raina, General Secretary of IndustriALL commented after the closure, “This meeting with all the stakeholders was a step forward. There is now a common understanding that joint efforts by the government, employers, unions and brands are required. IndustriALL continues its efforts to strengthen and unify the trade unions in the garment industry to bring about a real improvement for millions of garment workers”.