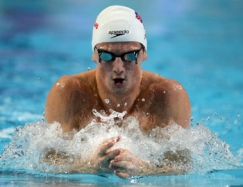 Through the agreement, Michael will continue to wear his favoured Speedo swimwear and equipment whilst competing, including at this summer’s 15th FINA World Championships in Barcelona, and will work with Speedo on projects aimed at promoting the sport of swimming throughout the UK.

The new partnership comes after Michael claimed silver in the 200m Breaststroke at the London Olympics, a feat that he repeated in December 2012 at the FINA World Swimming Championships (25m), in Istanbul, Turkey, with both medals won whilst wearing Speedo.

Michael will also wear Speedo at the 2014 Commonwealth Games in his hometown of Glasgow, where he will represent Scotland in competitive action at his former training base, Tollcross.

Michael Jamieson said: “I have been swimming since I was four years old and have always worn Speedo. I am really looking forward to a great partnership with them over the next two years, in the run up to a home Commonwealth Games.”

Sean Hastings, Vice President of Product and Marketing at Speedo International, said: “Michael Jamieson emerged as one of the brightest talents in British swimming during 2012, and we’re delighted that he will again be wearing Speedo in 2014 when he competes in front of his hometown crowd at the Commonwealth Games in Glasgow.

“Through his achievement in London, Michael became an inspirational figure to the next generation of British swimmers, and we’re pleased that he will work with us as we look to grow the sport throughout the UK in the coming years.”