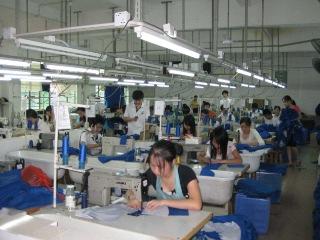 Garment workers in Cambodia will receive a minimum wage of US$ 75 per month, calculated from May 1, 2013, as per a document released by the Ministry of Social Affairs.
According to the statement signed by Minister of Social Affairs Ith Sam Heng, the Government was initially willing to raise the minimum wage of garment and footwear workers from the current US$ 61 per month to US$ 73 per month, but it was raised to US$ 75 per month plus a US$ 5 health allowance after Prime Minister Hun Sen intervened.
The statement says that the Labour Advisory Committee will complete the process of wage rise, in accordance with the Labour Law.
The decision to increase the minimum wage to US$ 80, including health allowance, is final and the Labour Advisory Committee will hold a meeting with all relevant stakeholders next week, the strike resolution committee of the Ministry of Social Affairs said.
The latest announcement has come after failure of several rounds of negotiations between the representatives of various unions and the Garment Manufacturers Association in Cambodia (GMAC).
At the two-day talks held last month, while the GMAC was willing to increase the minimum wage to US$ 72, some unions stood firm on their demand for hiking the wage to US$ 100 per month.
The Cambodian apparel industry employs over 300,000 workers, with more than 90 percent of them being female.