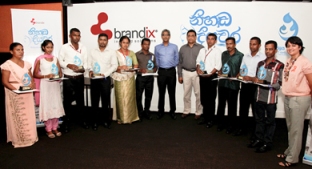 Top apparel exporter Brandix has pledged Rs 2.5 million for community water or sanitation projects as a reward for the unheralded community service of Group employees in their individual capacities.

Ten associates, as employees are referred to across the Group, have been chosen for the work they have personally undertaken, of their own volition, to help people in need of water -- the cause adopted by Brandix as its principal commitment to the community.

Titled 'Nihanda Diyawara' (silent service) this initiative was launched by the Brandix Group to mark World Water Day 2013, celebrated globally on 22nd March, and the ten associates were honoured at a ceremony on Monday, 25th March.

Each recipient, who was chosen out of nominations by fellow employees, received valuable personal prizes as well as a pledge of Rs 250,000 from Brandix for a community project of his or her choice, anywhere in Sri Lanka.

"It is inspiring to have associates that live the values and the vision of their company, with no expectation of reward or recognition," said Anusha Alles, Head of CSR at the Brandix Group. "When we called for nominations, we had no idea that so many of our colleagues were actively engaging in helping the community with water-related services at their own expense and on their own time. This is a perfect example of walking the talk."

She said each associate would be provided an opportunity to select a project and a beneficiary for the funds allocated by Brandix, encouraging further engagement with the needs of the community.

Providing examples of some of the work done by the Brandix associates recognised for community service, Ms Alles said P. Saman Priyantha of T&S Buttons (Lanka) had supplied water to villages using a tractor. Since he was resident in an area that had inadequate water supply, Mr. Priyantha had himself qualified for assistance under Brandix's 'Care For Our Own' (CFOO) programme, but had donated the water supply system that his family would have received to the village temple for the use of the entire community.

Meanwhile, T. T. M. C. De Alwis of the Brandix Centre of Inspiration and K. M. P. Dasanayake of Brandix Finishing - Avissawella had, through their involvement in community based organisations, provided leadership for the construction of water supply systems that benefitted several hundred families.