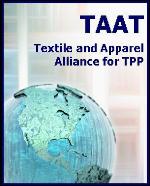 Haiti became the 31st country to join the TAAT alliance which is seeking strong and fair textile rules in the TPP agreement.

Gregor Avril, the Executive Director of the Association of Industries of Haiti said, “We stand with our free trade partners from around the world in urging the U.S. government to stand firm for the strongest textile rules in the agreement.

These include a yarn forward rule of origin, long tariff phase-outs for sensitive products and strong and effective customs rules and resources.“

Vietnam, the second largest apparel exporter to the United States, has proposed to eliminate the textile rules that have been present in every FTA for the past 25 years.

By changing the textile rules, Vietnam would open up a loophole so that China could backdoor its subsidized textile components through Vietnam and into the United States without paying duties.

Avril stated, “Apparel production in Haiti supports tens of thousands of desperately needed job in Haiti. Since the devastating earthquake, we are proud to have opened new textile and apparel plants and we believe this industry has a bright future in our country.

Moreover, apparel accounts for 90 percent of Haiti’s exports to the United States and earns badly needed foreign exchange for our country. However, if Vietnam’s proposals are included in a final TPP agreement, our bright future is ended and Haiti’s economy will be hit hard because our industry will be devastated.”

They are made up of mostly small and medium sized family owned companies. Studies have shown that Vietnam’s proposal would lead to the destruction of most of the textile and apparel production in the Western Hemisphere, Africa and the Middle East. This production has been on the upswing during the last several years.

Textile and Apparel Alliance for TPP

Jyothirmayi Dakkumalla
Fabric Monde
Weaving Brands
Ishak Aydin Ozturk
Ekoten
Functional textiles is one of the most important and...
Annabelle Georgina Hutter
Säntis Textiles
We source fibres, yarns and fabrics in Asia
Ankur Bhatia
Chogori India Retail Limited
Our focus is to source more and more from India
Vrinda Sachdev
Qbik
Womenswear is seeing a shift to lots of glitter and glamour
J J Valaya
House of Valaya
J J Valaya has succeeded in making it big in the world of...
Catalin Valean
ATU BODY COUTURE
I always design to educate and not to please