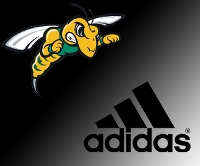 The Black Hills State University (BHSU) Athletic Department has agreed to and signed a deal to partner with sportswear giant Adidas and Universal Athletics to become the sole providers of all varsity athletic sports apparel for the Yellow Jackets.

“We are really excited to enter this partnership with Adidas and Universal Athletics, it’s a wonderful opportunity for our university, community, fans, and our student-athletes,” BHSU Director of Athletics, Jhett Albers said on Tuesday.

The athletic program chose to make the move to Adidas in an effort to strengthen the department branding as the Yellow Jackets continue to transition to the NCAA Division II level.

In the coming months, the BHSU community and fan base will be able to purchase new Yellow Jacket gear through the university bookstore on the campus of Black Hills State in Spearfish and eventually online as well at bhsubookstore.com.

Adidas is currently the exclusive apparel provider for several other universities around the country including UCLA, Michigan, Louisville, Texas A&M, Notre Dame, Indiana, Tennessee, Harvard, Nebraska among several other Division I and II programs.