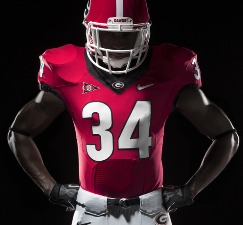 The University of Georgia Athletic Association, in partnership with Nike, has introduced a department-wide brand identity system designed to better define and distinguish what is already a nationally prominent collegiate brand.

The Georgia Athletic Association worked in close consultation with Nike over a 15-month period in order to develop an innovative and cohesive athletic brand identity that reflects the unique qualities of Georgia Athletics while promoting a consistent and unified look across all sports.

The updated identity prominently features and reaffirms the traditional Power "G" logo as the primary brand identity. The long-standing color palette of red, black, white and silver has been refined to allow for instant team identification. A newly-developed customized primary and secondary letter and number font will provide a consistent, distinctive look for all Bulldog athletics teams.

The graphic "GEORGIA" and "BULLDOGS" wordmarks will become consistent visual symbols of the Georgia Athletics organization, and the Bulldog logo has been refined in order to reflect the strong, iconic characteristics of the animal itself as well as the spirit of The University of Georgia Athletics.

"We're excited about this program's visual guidelines, which embrace the history and tradition of Georgia Athletics and positions the Georgia brand to reach a continually expanding and evolving audience," said UGA Director of Athletics Greg McGarity. "This program will also bring a more consistent look to our logos, uniforms, field markings and other areas where our marks are displayed."

As part of the identity update, the Georgia football team, men's and women's basketball teams and track and field team uniforms will be revised to utilize consistent new fonts and numbers in competition for 2013-14. All other sport teams will phase in new uniform looks over the next two years.

The "G" logo is the primary representation of the brand and is used as the main identifying device for athletics. Reinforcement of the primary identity will build equity in Georgia Athletics. In primary or secondary colors, the "G" logo works across all media. The "G" logo is iconic and distinct. It signals a consistent foundation-maintaining brand equity while reinforcing brand leadership, confidence and reliability.

Georgia's "G" logo eventually replaced the old block "G" as the official UGA symbol and it has stood the test of time. The logo made its first appearance on the gridiron in the opening game in 1964 and was an immediate hit with the Georgia fans, especially after Dooley's first three teams were so successful-highlighted by the 1966 SEC Championship.