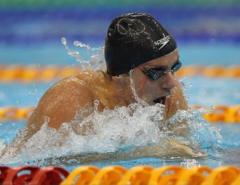 As part of Speedo’s long-standing partnership with the Australian Paralympic Committee, Matt wore Speedo swimwear throughout the London Paralympic Games as he swam his way into the record books.

Cowdrey shot to prominence in 2004 at the Athens Paralympics, snaring three Gold Medals, two Silvers and two Bronze Medals, all at the age 15. He followed up this ground breaking Paralympic debut four years later with five Gold Medals and three Silver Medals in the Beijing Paralympics.

It was in London 2012 that Matt etched his name into the Australian record books by winning a further five Gold Medals, two Silver and one Bronze Medal, becoming Australia’s most successful ever Paralympian.

“I am extremely excited to be joining the Speedo team as an ambassador. In my younger years as a swimmer I looked up to Speedo Ambassadors at the time, such as Kieren Perkins and Grant Hackett, and it is an honour to be following in their footsteps.

"I have always trained hard to achieve the best results possible, and it is a huge boost of confidence to have a global brand like Speedo partnering with me over the coming years,” says Cowdrey.

Sean Hastings, Vice President of Product and Marketing at Speedo International said: “We’re delighted to welcome Matt to the Speedo team. His competitive performance on swimming’s world stage makes him one of the most well-respected swimmers in the pool today. Matt demonstrates that you can achieve anything you put your mind to.”