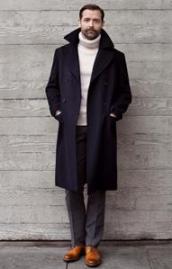 Debenhams announced that Savile Row tailor and star of BBC2’s Great British Sewing Bee; Patrick Grant will be joining the likes of Jasper Conran and Henry Holland to become its latest Designer at Debenhams collaboration.
Launching in Autumn/Winter 2013, Hammond & Co. by Patrick Grant has been designed to appeal to men who want classic yet contemporary style that makes a statement.
The launch further cements Debenhams’ designer fashion credentials, in particular the ‘next generation’ of design talent and is the first new designer addition to Debenhams’ menswear department since Jeff Banks in 2001.
“The Hammond & Co. by Patrick Grant range will consist of beautifully cut suits, which sit alongside formal and casualwear. It’s the essence of Savile Row tailoring at High Street prices.” says Paul Baldwin, Debenhams’ Menswear trading director.
“We are thrilled to have a new designer addition to our menswear department - customers can shop established industry names such as Jasper Conran and John Rocha alongside newer designers such as Patrick all in one place.”
“The Savile Row bespoke suit is the epitome of men’s tailoring. With Hammond & Co we have worked hard to ensure the synonymous cut, subtle flair and the perfect proportion is present through every piece.” says Patrick Grant.
Grant continues: “Hammond & Co is a house with a great history of excellence in sporting tailoring and we have done our best to remain true to this heritage.”
Hammond & Co. was founded in 1776 and was the go-to destination for royals looking for excellently tailored, quality made suiting. The new range by Patrick Grant maintains these key vales and reintroduces the brand back to the High Street all be it with a modern twist.
The collection comprises original Hammond & Co. detailing along with unique twists such as Patrick’s family ‘Grant’ tartan.
The range is comprised of 70 options across clothing and accessories and is a key factor in Debenhams’ aim to move up to the number two spot for market share in menswear.