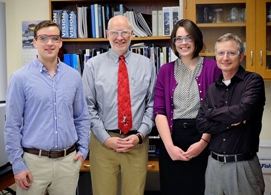 Keith R. Beck, David Hinks, Nathan H. Weisner, and Anne Crawford are being honored by AATCC as the recipients of the J. William Weaver Paper of the Year Award for "Liquid Chromatographic and Mass Spectrometric Analysis of Dyes for Forensic Purposes,” a peer reviewed article published in the January/February 2012 issue AATCC Review.

The award recognizes their paper as the best peer-reviewed paper published in the journal in 2012 and is given also in recognition of their significant contributions to textile science literature.

Keith Russell Beck obtained a BS in chemistry from Adrian College in 1965 and a PhD in organic chemistry from Purdue University in 1970. He is currently a professor at North Carolina State University (NCSU). He is a previous recipient of the Weaver Award. His paper, "On-line Monitoring of Reactive Batch Dyeing Exhaustion and Hydrolysis by FIA-HPLC," was the 2000 Paper of the Year.

Beck is a member of the American Chemical Society, and has been a member of the ACS Polymer Group, the Society for Applied Spectroscopy, the Illinois State Academy of Science, and the Midwest Association of Chemistry Teachers in Liberal Arts Colleges.

He joined AATCC in 1977, and has been active in both administrative and technical committees for the Association. He has served on the publications board, the education committee, Millson award committee, the editorial board, and the executive committee on research.

He has served as secretary to RA105 super critical fluid technology committee, and RA 103 spectroscopic technologies committee. Beck has served as chair for RA 45 finish analysis committee, RA 103 NIR technology committee, Millson award committee, education committee, and publications board. He has also served on the board of directors for the AATCC Foundation, and on the board of directors of the Association. Beck is the author of more than 70 peer-reviewed scientific and technical papers, conference and symposia papers, and book chapters.

In 1962, Beck was named a Sigma Alpha Epsilon outstanding pledge. In 1965, he was named to Alpha Chi (Scholastic Honorary), and was listed in the Who’s Who among students in American universities and colleges. In 1967 he was also named to Phi Lambda Upsilon (Science Honorary).

He was named one of twelve outstanding teachers selected by the Women’s Honorary at Elmhurst College in 1973. In 1975 he was listed on the American men and women of science. He was named faculty member of the year at Elmhurst College in 1976. Beck was a nominee for outstanding faculty member for the North Carolina State University College of Textiles in 1993 and 1994.

In 2000 he was a NCSU college of textiles nominee for the board of governors teaching award, and in 2008 he won an Outstanding Teacher award at the NCSU College of Textiles. This year he was honored with the NC State University Alumni Distinguished Undergraduate Professor Award, the highest level of recognition for undergraduate teaching and service at that school. In 2006, Beck received the Olney Medal, AATCC's highest award.