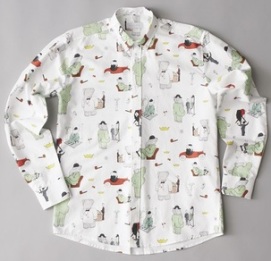 An international designer menswear collection inspired by vintage illustrations of Babar the Elephant launches at London's Goodhood store in April, 80 years after the books about this classic children's character were first published in the UK.

This is the first time that permission has been given for original artwork from the iconic Babar books by French painter, Jean de Brunhoff, to be used in a menswear fashion range, and its launch kick-starts the celebrations for Babar’s 80th anniversary in the UK.

It is an international menswear range, which launched first at the concept store, colette, in Paris, earlier this month. On Friday 12 April, the Babar Soulland Collection will be available in the UK exclusively at the London style boutique and online retailer, The Goodhood Store.

The key pieces within the collection include short and long-sleeved ‘button down’ Oxford shirts, t-shirts, a sweatshirt and cotton shorts. The designs feature all-over prints of the original, watercolour artwork from De Brunhoff’s books, showing Babar in his instantly recognisable, signature green suit.

Silas Adler, founder and head designer of Soulland, who created the range, comments:

“I have been a fan of the Babar universe since I was four years old, so it was a great honour being able to work on this collaboration. I was particularly inspired by a story from the first book, where Babar goes to the tailor to get his first suit – a bright green suit. I like the link and the relevance to menswear in that story. All drawings are originals drawn by the author and ‘father’ of the Babar universe”.

In 1931, The Story of Babar, the first book in the series by Jean de Brunhoff, was published in France, however it was not until 1933 that the books appeared in the UK.  This publishing milestone will be marked in Britain this year by a series of celebratory events engaging a multi-generational army of Babar fans, as well as new audiences who are yet to fall in love with this enduring and endearing character. Further details to be announced in due course.

As well as being available at Goodhood in the UK, the Babar collection will also be stocked by Opening Ceremony (New York, Los Angeles), Hunting & Collecting (Brussels), Soto (Berlin) and Voo (Berlin), plus other selected stores worldwide.