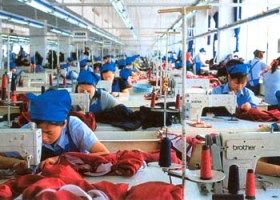 The increase in wages of labour has added to the difficulties faced by the Chinese apparel sector.
The increase in domestic wages, along with a slight increase in RMB exchange rate, has resulted in declining competitiveness of the Chinese garment industry in international market.
As a result, the volume of export orders for garments priced under US$ 5 decreased gradually in 2012. It was because some buyers shifted placing their orders to other countries which they found to be more attractive due to low wages there.
For example, the monthly salary of garment workers in Myanmar is US$ 40, while it is US$ 70 in Bangladesh, which is same as the wage levels that existed in China about 20 years ago.
Experts expect the trend of shift in orders from China to other countries, especially for low-priced garments, would continue in coming years.
In addition to decreasing competitiveness in export market, Chinese clothing sector is also facing a difficult situation in domestic market.
Last year, domestic consumption in China was impacted by the country’s economic situation, and retail sales, including sales at department stores, were not optimistic.

UK shoppers struggle to be understood by chatbots: survey

Though chatbots are mainly used for customer service, more than half...