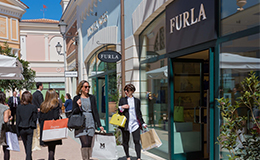 This third, new phase, which includes an additional Luxury Piazza, and which opened on 11 April, increases the retail offer at McArthurGlen Designer Outlet Castel Romano by around a third. This brings the total retail space to 30,000 sq m, to establish the centre as one of the largest designer outlets in Italy.

Tremendous attention has been paid to the architectural detail of the 7,500 sq m new phase, which officially opened on 11 April, nearly ten years after the centre first opened in October 2003 as McArthurGlen's second Designer Outlet in Italy, after Serravalle Designer Outlet near Milan. With the 250 additional new jobs, this brings the total number of people employed at the centre to around 1,100.

Roberto Meneghesso, McArthurGlen's Country Manager for Italy, says: "We are delighted with how the new brands have been received over the opening week. The new, expanded centre has been a huge success among discerning fashion lovers from Rome and the region of Lazio, as well as the many global shoppers who visit the centre."

McArthurGlen Designer Outlet Castel Romano, just 15 minutes from the centre of Rome, has become an increasingly popular shopping destination for the brand-conscious global shopper. Tax-free sales soared by more than 40 per cent in 2012 [source: Global Blue], with footfall and spend particularly high among the Russian and Chinese shoppers.

Over the month of April, McArthurGlen has linked up with Alitalia to offer passengers a special McArthurGlen Fashion Passport, with additional savings, at McArthurGlen Castel Romano. The offer will then be extended in May and June to be valid at all five McArthurGlen Designer Outlets in Italy.

Roberto adds: "Tourists, especially those from the world's emerging markets, love to shop, and at McArthurGlen Castel Romano they can find many of Italy's leading luxury and premium brands. At the same time, the centre offers a complete day-out experience, with cafes, restaurants and special multilingual services for tourists."