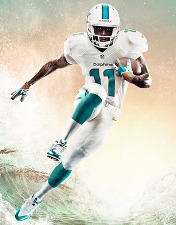 Miami was awarded an AFL franchise in 1965 and joined the NFL in 1970, a time when the city was booming with lights, sounds and colors. Travel was becoming more accessible and television presented a bold, eccentric new way to view the game of football.

The Miami Dolphins uniform design of that era drew from the vibrant hues of the city — aqua, coral and white — a combination never before seen on the football field.

The newly redesigned Dolphins uniform stays true to its roots while harnessing the city’s modern, cutting-edge characteristics for a more refined head-to-toe look that embodies what it means to be a Miami Dolphin.

Miami’s sun and South Florida waters serve as the foundation for the Dolphins uniform aesthetic. The purposefully simplistic design is sharpened by the use of new materials, sheen and color consolidation.

Nike designers worked closely with the NFL and the Dolphins to elevate, lighten and brighten the existing color palette, taking them back to their roots. The updated hues reflect the blues in the water, as well as the orange in the sun and glow of the city, to create a consistent look from head to toe.

“Miami’s new Nike Elite 51 uniform design is a true reflection of their culture – modern, refined and bold,” said Todd Van Horne, Global VP and Creative Director for Nike Football. “This highly innovative uniform system allows for zero distractions on the field and provides a fresh updated look to take the team into the 2013 season."

The new helmet sheen features a sparkled finish to reflect the sand, as well as a refined stripe pattern with a pop of orange, to highlight the horizon. The same stripe pattern is carried throughout the uniform into the new number and font design and through the stripe in the pant. The uniform also proudly features the "MIAMI" wordmark on the outside back of the pant and in the inside back of the neckline.

“As an athlete, you don’t want to worry about your uniform out on the field. It’s good that Nike thinks about the details so we don’t have to,” said Miami Dolphins wide receiver Mike Wallace. "Look good, feel good, play good — that’s what it’s all about.”