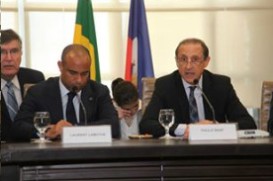 Mr. Lamothe (R); Mr. Skaf (L)/ Haiti Libre
Laurent Lamothe, the Prime Minister of Haiti, has urged Brazilian companies operating in the textile and garment sector to invest in Haiti.
Paying an official visit to Brazil, Prime Minister Lamothe met Mr. Paulo Skaf, president of the Federation of Industries of Sao Paulo (FIESP), the largest federation of Brazilian companies.
During his meeting, Mr. Lamothe said Brazilian companies can relocate to Haiti and reap huge benefits under the Haitian Hemispheric Opportunity through Partnership Encouragement (HOPE) Act, which allows duty-free access to the U.S. market for certain Haitian-made apparel and other articles.
The Prime Minster said he wants to create thousands of new jobs in Haiti through the apparel industry, according to Haiti Libre report.
Terming Haiti-Brazil relations as excellent, Mr. Lamothe said it is necessary for his Government to take steps to attract Brazilian investors in the country, as it would create thousands of jobs for Haitian people.
It was agreed that Mr. Skaf would lead a delegation of eight Brazilian companies to Haiti in July this year as a follow-up of the meeting with Prime Minister and explore investment opportunities in Haitian clothing sector.
Separately, a cooperation agreement between Haiti’s Investment Facilitation Center (CFI) and APEX-Brazil, the agency for promotion of Brazilian exports, was also signed during the visit.
The agreement is in sync with the vision of Lamothe’s Government to open Haiti for business, work for attracting new capital for economic growth and thereby increase the purchasing power of Haitians.
Under the agreement, the two nations agreed to work together to increase investment and trade relations between the two countries, while striving to promote, support, and encourage the exchange of trade delegations.