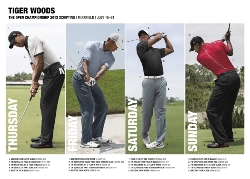 At The Open Championship, Nike Golf athletes will compete in new designs from the fall 2013 collection to combat unpredictable weather conditions at Muirfield in Scotland.

“We make sure our athletes have the base layers, Dri-FIT polos, cover-ups and outerwear so they are prepared for a round that could see four different seasons over 18 holes,” said Merritt Richardson, VP of Global Golf Apparel and Footwear."Our athletes will be armed with the essentials so they don’t have to think about their apparel during their quest for a Major Championship trophy.”

Woods will rely on proven innovations from Nike Golf’s fall 2013 Tiger Woods Collection. Throughout the tournament, Woods will wear the TW Ultra Polo in White, the TW Saturated Color Polo in Light Armory Blue,the TW Trajectory Polo in Black , and the TW Stripe Polo in Hyper Red. The ultra lightweight polos feature a laser-perforated collar for increased ventilation to keep the athlete cool while also reducing overall weight. All four styles incorporate the posture-performance chassis with kimono- style back to allow Woods an increased range of motion throughout his swing. Woods will finish his look with the new Nike TW’14 footwear.

McIlroy will sport looks from Nike Golf's Fall 2013 Tour Performance collection, featuring the latest innovations in lightweight, breathable fabrications. He will kick off the week in the Vent Tech Polo in White with pops of Gamma Green. On Friday, McIlroy’s outfit goes dark with the Fashion Bold Stripe Polo in Black  and Half-zip Banded Tech Cover-up in Orange if the round brings cool weather. For the weekend, McIlroy will wear the Fashion Print Polo in Black  on Saturday and the Light Weight Tech Polo in Game Royal  for his final round. He will stay protected with the new Nike Hyperadapt Storm-FIT jacket if wet weather sweeps in at Muirfield. McIlroy will complete his look with the Nike Lunar Control footwear.