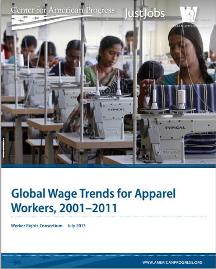 In most of the leading apparel-exporting countries, the wages for garment workers have stagnated or declined over the past decade, says a latest report.
Among the top four apparel exporters to the United States, prevailing wages in 2011 for garment workers in China, Vietnam, and Indonesia provided 36 percent, 22 percent, and 29 percent of a living wage, respectively, says a report titled “Global Wage Trends for Apparel Workers 2001-11”, prepared by the Worker Rights Consortium for the Center for American Progress.
In Bangladesh, which is home to the world’s fastest-growing export-apparel industry, prevailing wages gave workers only 14 percent of a living wage, according to the report.
Among the top 21 countries in terms of apparel exports to the US, the prevailing wages fell in real terms by a per-country average of 12.4 percent in the Dominican Republic, Guatemala, the Philippines, and Thailand, says the study.
During the decade under study, the largest erosion in wages of garment workers was seen in Mexico, the Dominican Republic and Cambodia, where the wages fell in real terms by 28.9 percent, 23.74 percent and 19.2 percent, respectively.
The decline in real wage means the gap between prevailing wages and living wages actually grew, as it happened in Bangladesh, Mexico, Honduras, Cambodia and El Salvador—five of the top 10 apparel-exporting countries to the US.
However, real wages for clothing workers grew in China, India, Indonesia, Vietnam, Peru and Haiti during 2001-11 decade. Wage gains in India and Peru were quite modest and grew at less than 2 percent a year between 2001 and 2011. On the other hand, real wages grew more substantially in Haiti, Indonesia and Vietnam, where they grew by 48.2 percent, 38.4 percent and 39.7 percent, respectively, over the 10-year period. However, wages in these countries were still short of a living wage.
The report says the Chinese apparel workers are on course to attain a living wage by 2023, but only if the 124 percent rate of wage growth seen between 2001 and 2011 is sustained.
“Wages have only risen significantly in real terms in countries whose governments have taken affirmative steps to ensure that workers share the rewards from the industry’s growth and whose manufacturing sectors have diversified to put apparel factories in competition for labor with makers of higher value-added goods,” the report states.
The research indicates that while the establishment of an export-garment-manufacturing sector may tend to expand formal employment that is more profitable than alternatives in the informal sector or agricultural labor, the growth of an export-apparel industry does not necessarily raise its workers out of poverty when left to its own workings.
“While the expansion of garment-sector employment may have made the very poor initially significantly less poor, it has offered limited opportunities for workers in most of the major apparel-exporting countries to make further upward progress toward an income that offers them a minimally decent and secure standard of living,” states the study.