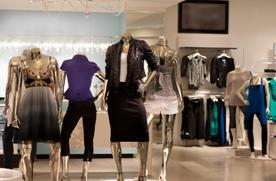 China’s continues to remain the top apparel market for global retailers due to its market size and strong growth in clothing sales, followed by the United Arab Emirates (UAE) and Chile, according to the Retail Apparel Index 2013 released by A.T. Kearney.
Kuwait, Brazil, Saudi Arabia, Russia, Malaysia, Mexico and Turkey are the other developing countries identified by the Index, which shows that countries continue to offer compelling opportunities to apparel retailers.
The Retail Apparel Index identifies the top 10 developing countries ranked in the A.T. Kearney Global Retail Development Index in terms of market attractiveness, retail development, and country risk for their clothing retail industries
"Since the last Retail Apparel Index in 2011, Western apparel retailers have increasingly looked for growth from developing markets, where apparel spending remains strong as disposable incomes rise. E-commerce has also developed significantly for both local and international players,” said Michael Moriarty, A.T. Kearney partner and co-author of the study, in a press release.
The report says three trends have shaped China's apparel market: the rise of e-commerce, a boom in fast fashion, and the evolution of the luxury market.
According to Althea Peng, A.T. Kearney partner and co-author of the study, “In most emerging markets, e-commerce is less than 1 percent of total sales. In China, it is 6 percent which is higher than in the United States. More than three-quarters of online sales in China are in apparel.”
Several fast fashion retailers have aggressively expanded in China over the last year. For example, Uniqlo opened 65 stores in China in fiscal year 2012, bringing its total count to 145, and it plans to add 100 stores a year to reach 1,000 stores. Similarly, H&M opened 52 stores in 2012 and Zara opened 37 stores. Gap has plans to open 35 stores in 2013.
The report notes that China’s luxury market remains strong, and it surpassed Japan to become the second largest luxury market in the world in 2012. However, it is not growing as fast as in the past. A key reason is that a large portion of luxury purchases are made abroad, due to lower prices and a strong renminbi.
Three Latin American countries—Chile, Brazil and Mexico—take a strong position in the Apparel Index. Brazil is South America's largest apparel market, with $42 billion in sales, compared to $14 billion for Mexico. The Brazil luxury market is forecast to grow to more than $48 billion by 2025.
More Apparel/Garments News - United States Of America...