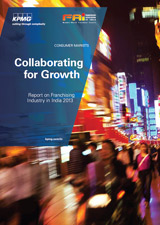 There is huge potential for growth of retail franchising in India, due to expected rise in consumption fueled by population growth, according to a recent report.
The report “Collaborating for Growth: Report on Franchising Industry in India in 2013”, released by KPMG, states that increasing consumption and willingness to spend, increasing purchasing power of the middle class, growing preference for branded and quality products among Indian consumers, increased global exposure and growing aspirations to adopt western culture and the use of international brands are the demand side factors that point at increased scope for retail franchising.
Similarly, on the supply side, increasing set of opportunity-driven competent entrepreneurs, increasing awareness of franchising as a business opportunity and its relative low risk profile, and Government initiatives such as the liberalization of FDI in retail which has allowed foreign brands to enter India are the factors that would augment the growth of retail franchising.
India drives about 2.5 percent of total retail sales through franchise formats compared to the 50 percent in the US, which indicates a huge potential for the market in future, according to the report.
The report suggests that allowing Foreign Direct Investment (FDI) in single brand & multi-brand retail is expected to generate interest among large international brands to adopt the franchising route to enter and expand in the country.
Many international brands have already entered India, adopting the franchise route to growth and have altered their franchise models to fit the Indian scenario.
However, several major international brands that are contemplating to enter the Indian market feel that the country’s growing and fragmented market can become a challenge for international franchisors to deal with, states the report.