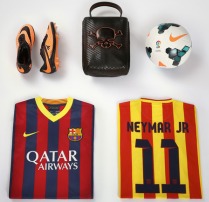 As Neymar prepares to step out at Camp Nou for the first time for new club FC Barcelona against his old team Santos, three key Nike Football innovations also make their on-field debut at the home of La Liga's current champions.

In match, Neymar will wear the Hypervenom Phantom boot. Neymar helped launch the boot earlier this year and also played a key part in its development. The Hypervenom's upper is created using a soft supple mesh bound with a thin polyurethane film, finished off with Nike's All Condition Control (ACC) application for superb touch regardless of the conditions.

Throughout La Liga BBVA this season teams will line up with the new Nike Incyte ball at their feet. This is Nike's most technically advanced football to date, featuring a visual design that aims to increase the ball's visibility and players' reaction as it travels across the pitch.

FC BARCELONA HOME AND AWAY SHIRTS

And the final piece of the package is a pair of freshly designed home and away kits, both of which pay homage to the Senyera – the flag of Catalunya. For FC Barcelona, Neymar will don the No. 11 shirt.

To mark Neymar's first game with the club, Nike sent the athlete a special leather boot bag featuring a laser pattern inspired by the upper of the Hypervenom boot. The Hypervenom skull motif is hand-cut and stitched in Hypervenom orange to contrast against the black leather, and a small side compartment makes room for personal items.

85% of clothes, textiles in US dumped in landfill or incinerator: NIST

Only about 15 per cent of used clothes and other textiles in the...